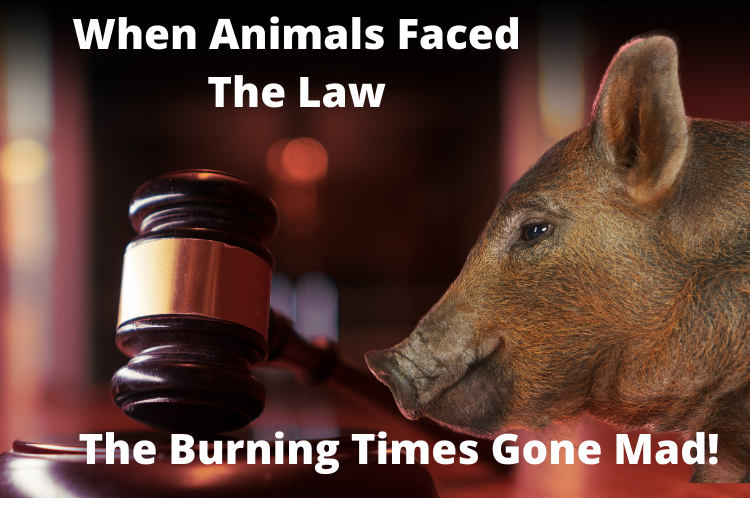 We all know that the burning times focused on accusing many falsely as witches, but the hysteria of the witch hunts didn’t end with just humans. Indeed, in many parts of Europe, it carried over to blaming animals for crimes and putting them on trial!

On March 5, 1986, some villagers near Malacca in Malaysia beat to death a dog, which they believed was one of a gang of thieves who transform themselves into animals to carry out their crimes. The story was reported on the front page of the London Financial Times. “When a dog bites a man,” it is said, “that’s not news; but when a man bites a dog, that is news”.

Such stories, however, are apparently not news for very long. Indeed the most extraordinary examples of people taking retribution against animals seem to have been almost totally forgotten. A few years ago I lighted on a book, first published in 1906, with the surprising title The Criminal Prosecution and Capital Punishment of Animals by E.P.Evans, author of Animal Symbolism in Ecclesiastical Architecture, Bugs and Beasts before the Law, etc., etc. The frontispiece showed an engraving of a pig, dressed up in a jacket and breeches, being strung up on a gallows in the market square of a town in Normandy in 1386; the pig had been formally tried and convicted of murder by the local court. When I borrowed the book from the Cambridge University Library, I showed this picture of the pig to the librarian. “Is it a joke?”, she asked.

No, it was not a joke. All over Europe, throughout the middle-ages and right on into the 19th century, animals were, as it turns out, tried for human crimes. Dogs, pigs, cows, rats and even flies and caterpillars were arraigned in court on charges ranging from murder to obscenity. The trials were conducted with full ceremony: evidence was heard on both sides, witnesses were called, and in many cases, the accused animal was granted a form of legal aid — a lawyer being appointed at the taxpayer’s expense to conduct the animal’s defense.

Ad
In 1494, for example, near Clermont in France, a young pig was arrested for having “strangled and defaced a child in its cradle”. Several witnesses were examined, who testified that “on the morning of Easter Day, the infant being left alone in its cradle, the said pig entered during the said time the said house and disfigured and ate the face and neck of the said child .. which in consequence departed this life.” Having weighed up the evidence and found no extenuating circumstances, the judge gave sentence:
We, in detestation and horror of the said crime, and to the end that an example may be made and justice maintained, have said, judged, sentenced, pronounced and appointed that the said porker, now detained as a prisoner and confined in the said abbey, shall be by the master of high works hanged and strangled on a gibbet of wood.
Evans’ book details more than two hundred such cases: sparrows being prosecuted for chattering in Church, a pig executed for stealing a communion wafer, a cock burnt at the stake for laying an egg. As I read my eyes grew wider and wider. Why did no one tell us this at school? Why were we taught so many dreary facts of history at school, and not taught these? 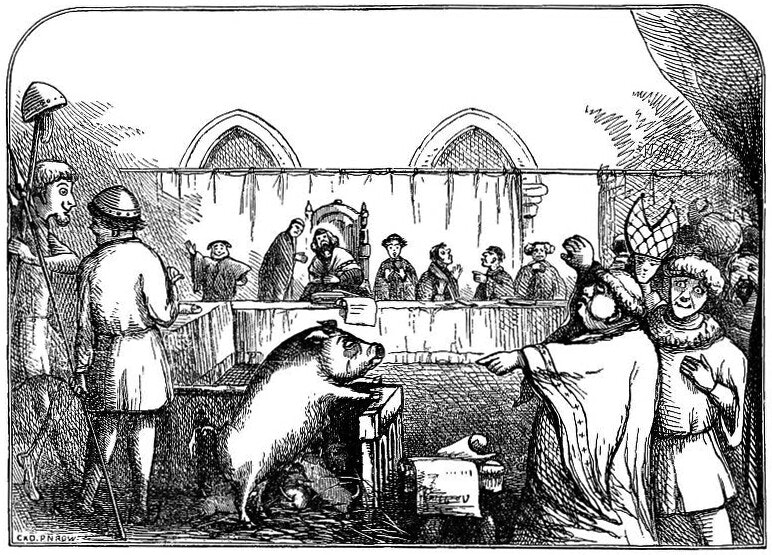 We all know how King Canute attempted to stay the tide at Lambeth; but who has heard, for example, of the solemn threats made against the tides of locusts which threatened to engulf the countryside of France and Italy? The Pied Piper, who charmed the rats from Hamelin is a part of legend; but who has heard of Bartholomew Chassenée, a French jurist of the sixteenth century, who made his reputation at the bar as the defense counsel for some rats? The rats had been put on trial in the ecclesiastical court on the charge of having “feloniously eaten up and wantonly destroyed” the local barley. When the culprits did not in fact turn up in court on the appointed day, Chassenée made use of all his legal cunning to excuse them. They had, he urged in the first place, probably not received the summons since they moved from village to village; but even if they had received it they were probably too frightened to obey, since as everyone knew they were in danger of being set on by their mortal enemies the cats. On this point, Chassenée addressed the court at some length, in order to show that if a person be cited to appear at a place to which he cannot come in safety, he may legally refuse. The judge, recognizing the justice of this claim, but being unable to persuade the villagers to keep their cats indoors, was obliged to let the matter drop.

For an animal found guilty, the penalty was dire. The Normandy pig, depicted in the frontispiece of the Evans book, was charged with having torn the face and arms of a baby in its cradle. The pig was sentenced to be “mangled and maimed in the head forelegs”, and then – dressed up in a jacket and breeches – to be hung from a gallows in the market square.

But, as we have seen with Chassenée’s rats, the outcome of these trials was not inevitable. In doubtful cases, the courts appear in general to have been lenient, on the principle of “innocent until proved guilty beyond a reasonable doubt”. In 1587, a gang of weevils, accused of damaging a vineyard, were deemed to have been exercising their natural rights to eat – and, in compensation, were granted a vineyard of their own. In 1457 a sow was convicted of murder and sentenced to be “hanged by the hind feet from a gallows tree”. Her six piglets, being found stained with blood, were included in the indictment as accomplices. But no evidence was offered against them, and on account of their tender age, they were acquitted. In 1750 a man and a she-ass were taken together in an act of buggery. The prosecution asked for the death sentence for both of them. After due process of law, the man was sentenced, but the animal was let off on the ground that she was the victim of violence and had not participated in her master’s crime of her own free-will. The local priest gave evidence that he had known the said she-ass for four years, that she had always shown herself to be virtuous and well-behaved, that she had never given occasion of scandal to anyone, and that therefore he was “willing to bear witness that she is in word and deed and in all her habits of life a most honest creature.” 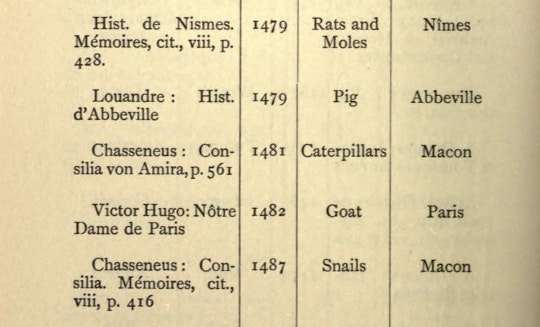 Detail from a page in the Appendix of The Criminal Prosecution and Capital Punishment of Animals (1906) by E.P.Evans

What was the purpose of these lengthy and extravagant procedures? A desire for revenge cannot have been the only motive. Evans cites cases of inanimate objects being brought before the law. In Greece, a statue that fell on a man was charged with murder and sentenced to be thrown into the sea; in Russia, a bell that peeled too gleefully on the occasion of the assassination of a prince was charged with treason and exiled to Siberia.
The protection of society cannot have been the only motive either. Evans tells of the bodies of criminals, already dead, being brought to trial. Pope Stephen VI, on his accession in 896, accused his predecessor, Formosus, of sacrilegiously bringing the papal office into disrepute. The body of the dead pope was exhumed, dressed in the pontifical robes and set up on a throne in St. Peter’s, where a deacon was appointed to defend him. When the verdict of guilty was pronounced, the executioner thrust Formosus from the throne, stripped him of his robes, cut off the three benedictory fingers of his right hand and threw his body “as a pestilential thing” into the Tiber.
Taken together, Evans’ cases suggest that again and again, the true purpose of the trials was psychological. People were living at times of deep uncertainty. Both the Greeks and medieval Europeans had in common a deep fear of lawlessness: not so much fear of laws being contravened, as the much worse fear that the world they lived in might not be a lawful place at all. A statue fell on a man out of the blue, a pig killed a baby while its mother was at mass, swarms of locusts appeared from nowhere and devastated the crops, the Holy See was becoming riddled with corruption. At first sight, such misfortunes can have appeared to have no rhyme or reason to them. To an extent that we today cannot find easy to conceive, these people of the pre-scientific era lived every day at the edge of explanatory darkness. No wonder if, like Einstein in the twentieth century, they were terrified of the real possibility that “God was playing dice with the universe”. 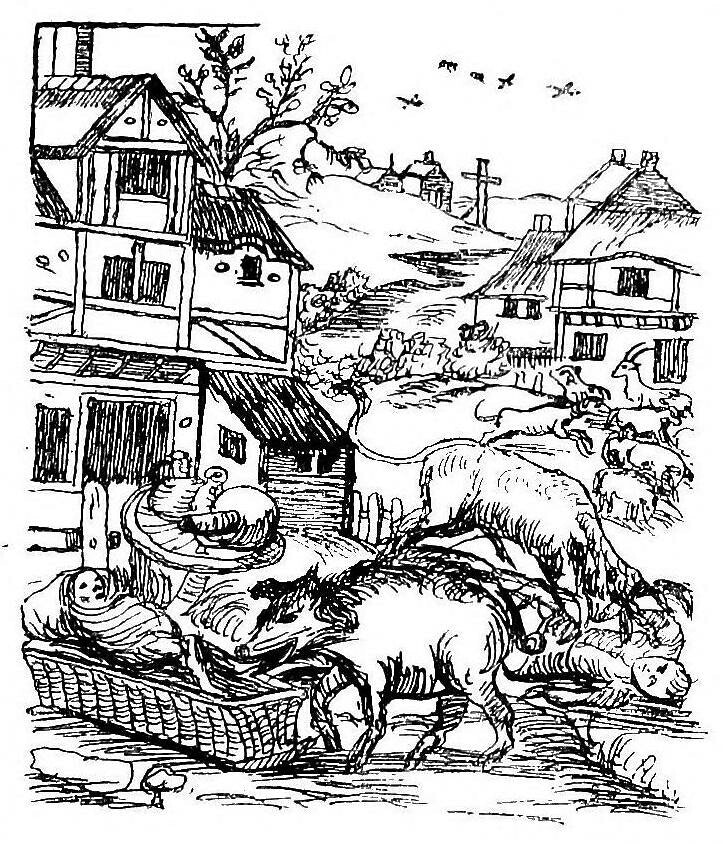 Image from the title page of The Criminal Prosecution and Capital Punishment of Animals (1906) by E.P.Evans

The same anxiety has indeed continued to pervade more modern minds. Dostoevsky’s Ivan Karamazov, having declared that “Everything is permitted”, concluded that were his thesis to be generally acknowledged “every living force on which all life depends would dry up at once”. Alexander Pope claimed that “order is heaven’s first law”. And Yeats drew a grim picture of a lawless world:

Turning and turning in the widening gyre

The falcon cannot hear the falconer;

Mere anarchy is loosed upon the world.

Yet the natural universe, lawful as it may in fact have always been, was never in all respects self-evidently lawful. And people’s need to believe that it was so, their faith indeterminism, that everything was not permitted, that the center did hold, had to be continually confirmed by the success of their attempts at explanation.