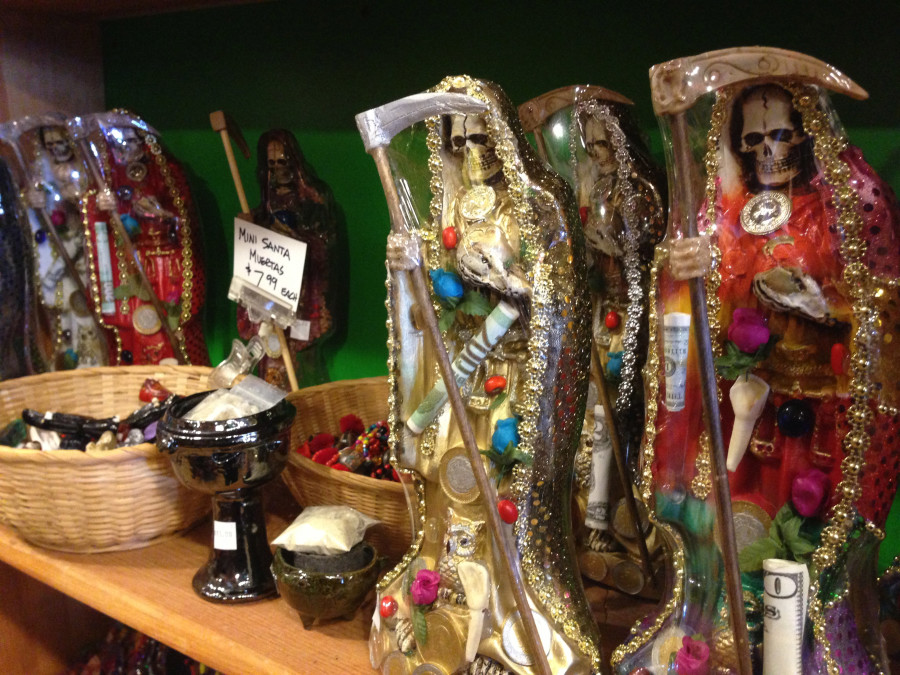 FILE – In this Feb. 13, 2013 file photo, statues of La Santa Muerte are shown at the Masks y Mas art store in Albuquerque, N.M. The Vatican’s culture minister said in Mexico City on Wednesday, May 8, 2013 that Mexico’s folk Death Saint is a blasphemous symbol that shouldn’t be part of any religion. La Santa Muerte is worshipped both by drug dealers in Mexico and by the terrified people who live in drug-torn neighborhoods. (AP Photo/Russell Contreras, File)

The owner, Mayra Edith Blair, had been saving up to fulfill her lifelong dream to take her family to Disneyland, according to her Facebook feed. But she had competitors.

“As part of her witchcraft or curse that she was about to perform, she needed graveyard dirt,” said U.S. Attorney Frank Dale during a March detention hearing.

Blair allegedly had sought to put competitors out of business by placing a potion made of graveyard dirt, oil, and water outside their storefronts.

And eventually, she went on trial – for tax fraud, not witchcraft.

But the government held a witchcraft-themed hearing anyway. Prosecutors feared Blair might use her occult powers, or at least her reputation as a witch, to scare off witnesses with knowledge of the fraud case.

The United States wanted her jailed.

Blair was a reputed “bruja” – Spanish for witch – and a practitioner of Santa Muerte, a popular and rapidly growing Mexican folk religion. The faithful worship images of a vestment-wrapped skeleton.

The Salem witch trials ended centuries ago. But Reveal has tracked down more than a dozen instances nationwide where law enforcement officials have used Santa Muerte practice as an indicator, targeting worshippers as criminals.

Court records show that prayer books, statuettes, even skeleton-emblazoned air fresheners have been used as evidence in efforts to detain, search, convict and sentence people.

To the police, prosecutors, expert witnesses and other criminal justice officials, Santa Muerte is a dangerous sect with a Hollywood-fueled reputation for associations with both the occult and the violent narcotics trade. It has even entered pop culture: Season three of the “Breaking Bad” TV series featured a pair of Santa Muerte-worshipping drug cartel assassins. A statue of the goddess Santa Muerte sits with packages of marijuana and a gun after a drug bust in Tijuana, Mexico, in 2010. Some law enforcement agencies believe that the Mexican folk religion is linked to violent crime. CREDIT: GUILLERMO ARIAS/ASSOCIATED PRESS FILE

For millions of Mexicans, however, Santa Muerte is simply the faith of everyman. Taxi drivers, maids and millions of others venerate the deity with powers to protect travelers or anyone else seeking a path to the divine.

In line with other Catholic saints, she’s viewed more as a celestial messenger – the beloved goddess of death. Her name translates literally as “Holy Death.” Though her precise depiction varies widely throughout Mexico, Santa Muerte is not universally, or even widely, regarded as wicked. She’s seen by millions of Catholic Mexicans as a protector who grants blessings to those who show faith and bring gifts.

“Yet again I’m made aware that, whenever I need a friend, God is there with his angels to listen to me,” she wrote in a Facebook post three years ago.

As testimony unfolded on March 20 in the Blair case, federal Magistrate Judge C. Clifford Shirley said that the prosecutor had misunderstood Blair’s actions and that she hadn’t meant to menace anyone.

Dale said he knew about Santa Muerte because of his expertise with narcotics cases. And he had spotted the photograph of a potential witness at a Santa Muerte shrine in Blair’s office. It was a voodoo-like intimidation technique, he explained.

But Blair’s lawyer retorted that the shrine was a place of honor and that the potential witness – Blair’s office accountant – had placed the photo herself at the shrine.

“I don’t think that indicates that it was done in the first instance as some sort of intimidation or black magic or witchcraft or anything like that,” Judge Shirley said. “I don’t find that the government has made the case for danger.”

“In the 1980s, occult crime experts would say, ‘There’s satanism everywhere,’ ” he said. “We have a new kind of moral panic now over Santa Muerte.”

A cottage industry of professional experts perpetuates this idea of a direct link between Santa Muerte and crime. Trainers professing such a nexus make money by giving seminars to police. They then serve as paid expert witnesses at trial, testifying that officers were correct to deploy such training.

This law enforcement belief is reinforced every time police stop a Mexican and turn up devotional items and drugs.

An Idaho police officer spotted a Santa Muerte statuette on the dashboard of a parked car, according to a description in a court case against Jose Guadalupe Perez-Jungo.

“The officer requested backup, which arrived approximately 10 minutes later,” according to court filings.

Perez-Jungo pleaded guilty to methamphetamine possession but later appealed on grounds that the search was illegal. Last year, a judge rejected his appeal.

It’s a pattern repeated in other states, in which officers testify that special training led them to identify Santa Muerte items as drug evidence and treat worshippers as suspected criminals.

Robert Bunker, a researcher in policing techniques at the FBI’s training academy in Quantico, Virginia, said he has given many officers anti-narcotics training that included recognizing Santa Muerte. He defended using Santa Muerte practice as evidence of possible wrongdoing – with adequate training.

Bunker said there are two types of Santa Muerte: a “benign” kind, and a “virulent” kind associated with drug traffickers. Well-trained officers, he said, can distinguish between the two at a traffic stop. And using such evidence as probable cause to search or detain people is justified “because of direct linkages of numerous cartel members to other, more virulent forms of Santa Muerte worship,” he wrote in an email.

Asked how police can tell the difference, Bunker responded: “This would be like asking a bomb squad about its tactics, techniques and procedures to diffuse a bomb.”

Academic experts said they were aware of no such distinction. Nor does it come up in Santa Muerte-related court filings and hearing transcripts that Reveal reviewed around the country.

“Many law enforcement agents actually believe in Santa Muerte as a supernatural entity that has the power to influence human action and events,” said Andrew Chesnut, a religious studies professor at Virginia Commonwealth University.

Researcher David Metcalfe works with Chesnut tracking Santa Muerte and law enforcement reaction to the religion. Linking Santa Muerte to crime persists as a sort of legend repeated from officer to officer, without any real research to back up their beliefs.

“The justice system is kind of a closed club,” he said. “These people aren’t anthropologists. They’re not proficient in religious studies.”

Police misreading of the Santa Muerte faith can have consequences beyond traffic stops.

In 2013, Christian Ramiro Mireles appealed his life sentence in Texas, saying it was unfair for a jury to have heard about his Santa Muerte worship as evidence in a sentencing hearing.

The prosecution had called as a witness Texas police investigator Leo Pena, who gives seminars to law enforcement agencies in which he calls Santa Muerte the “narco saint.”

Understanding Santa Muerte provides a look inside the heads of vicious criminals, he testified.

“A lot of the criminal element coming into the United States from Mexico have different mind-set,” he said.

Mireles’ sister testified that her entire family worshipped “Santisima Muerte as a part of (their) Catholic religion,” and that she was not aware of any violent practices associated with it.

But a Texas state court justice rejected Mireles’ appeal, stating that “a person’s affiliation with a certain religion or cult may be relevant to punishment.”

Robert Almonte, a U.S. Marshal in the Western District of Texas, is one of law enforcement’s more prolific Santa Muerte gurus. He claims that his self-produced video, “Patron Saints of the Mexican Drug Underworld,” has reached officers around the country.

Last year, a panel of federal appeals court judges in New Mexico ruled that Almonte did not qualify as an expert on Santa Muerte – despite his claims that he’d spent “hundreds, perhaps thousands of hours” studying the topic.

His suggestion that a Santa Muerte prayer alone could be evidence of a crime “approaches psychobabble,” the panel said in a July 2014 ruling throwing out two drug convictions.

In denouncing Almonte’s testimony as baseless, the appellate panel borrowed language from the Salem witch trials.

“Almonte’s testimony essentially painted the defendants in this case as heretics, holding beliefs ‘not recognized by the Catholic Church,’ ” the judges wrote in their ruling overturning the convictions of two defendants and ordering a new trial.

Almonte declined an interview request and did not respond to written questions.

A spokeswoman for the U.S. Marshals Service said she would not comment on news reports saying Almonte was being investigated by the agency’s inspector general for failing to report payments he’d received for unauthorized training presentations.

As of Oct. 13, Almonte’s official biography remained on the Marshals Service website and still boasted about his expertise: “Marshal Almonte is one of the foremost authorities on the investigation of narcotics cases and has spent much time and research on how Mexican drug traffickers subscribe to a unique ‘spiritual world’ they believe aides (sic) them in their trafficking efforts and protects them from law enforcement.”