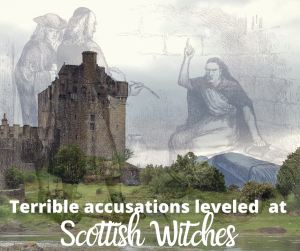 The Scottish Witchcraft Act saw the grizzly demise of many a soul accused of a variety of heinous and occult crimes.

When King James V was a teenager his guardian and stepfather, Archibald Douglas, 6th Earl of Angus, kept him as a prisoner. When he eventually escaped James vowed vengeance on Douglas and his extended family, including his sister Janet Douglas, Lady Glamis. In 1537 James had her arrested with a trumped-up charge of witchcraft and mixing of potions in a conspiracy to kill him. The people around her were tortured to extract the ‘evidence’ required to ensure her conviction, and on July 17 Janet was burned alive on Castle Hill, Edinburgh, with her young son forced to watch.

The last Scot to be tried under the 1735 Witchcraft Act, Callander-born Duncan was notorious as a schoolgirl for her dark premonitions and hysterical outbursts. Later she claimed she could summon spirits by emitting ectoplasm from her mouth, but was exposed and convicted as a fraud – the ‘ectoplasm’ was, in fact cheesecloth. In 1941 Duncan held a seance in which a dead sailor told her HMS Barham had been sunk. Because this information had not been released to the public Duncan was arrested and imprisoned, for falsely claiming to procure spirits.

In 1679 Annabel Thomson, Margaret Pringle, Margaret Hamilton, William Craw, Bessie Yickar and another Margaret Hamilton were detained in the tollbooth at Borrowstounness on charges of witchcraft. It was alleged that they had all renounced their baptisms and eaten, drank, danced and fornicated with the devil on numerous occasions. One of the women was also accused of using magic to locate money. They were all found guilty and strangled at the stake.

Accused of being a witch in 1727, Janet Horne was the last person in the British Isles to be executed for witchcraft. When Horne and her daughter were arrested in Dornoch, after being accused of being witches by their neighbors, she was showing signs of senility. After a hasty trial, they were both found guilty. Whilst her daughter managed to escape, the old woman was stripped, smeared with tar, paraded
through the town on a barrel and burned alive.

In 1662 Isobel Gowdie, a housewife from Lochloy, Nairn, was executed after freely confessing – without being tortured, which was usual for the time – to being part of a coven of thirteen that feasted with the Queen of the Fairies and also had the ability to transform into animals. She also claimed to have killed a man with elf-arrows and to have been raped and beaten by the Devil. Gowdie’s testimony is considered to be the most exceptional ever given by a witchcraft suspect in Britain.

6. The Witches from Macbeth

‘Double, double toil and trouble; / Fire burn, and cauldron bubble. This famous line is spoken by Shakespeare’s witches, who predict Macbeth’s rise to the king and his eventual downfall. They were probably based on a chronicle of Britain written in 1587, in which Macbeth and Banquo encounter ‘three women in strange and wild apparell’, believed to be Weird Sisters, ‘goddesses of destiny’.

Scotland’s first major witchhunt began with an alleged plot by a coven of East Lothian witches to sink King James V1’s ship by conjuring a storm. A staunch believer in witchcraft, James had over a hundred suspected witches in North Berwick arrested, and the trials lasted for two years. Eventually, after being tortured horrendously, a number of suspected witches confessed to consorting with the devil and devoting themselves to doing evil. They were strangled and burnt at the stake.

In 1705, in Pittenweem, in the East Neuk of Fife, a sixteen-year-old boy, Patrick Morton, accused a number of his neighbors of witchcraft. No-one questioned his story. One of the accused was arrested and left alone in a dark cell for five months, another starved to death in a dungeon whilst a third, Janet Cornfoot, was caught by an angry mob – which apparently included ancestors of Sir Sean Connery – who beat her, dragged her to the seafront, tied her between a ship and the shore and stoned her to death.

Born in Carluke in 1599, Weir was a soldier and occultist with a reputation for religiosity. Because he lived near the top of West Bow, in Edinburgh’s Grassmarket, he was known as the ‘Bowhead Saint’. In 1670, on his sickbed, Weir confessed to a secret life of vice and sorcery. Along with his sister, the Major related incredible stories of meeting strangers in fi ery chariots and being given ‘supernatural intelligence’. They were both tried and found guilty of witchcraft. Weir’s final words, before being garrotted and burnt were: ‘I have lived as a beast, and I must die as a beast’.

The last mass execution for witchcraft in western Europe occurred in Paisley in 1697. In August 1696 11-year-old Christian Shaw, daughter of local landowner in Bargarran, became violently ill with fits after being cursed by one of the family’s servants. Other strange symptoms included pulling balls of hair, straw, coal, gravel and chicken feathers from her mouth. In all 35 men and women were implicated, seven of which were found guilty. Two died in prison and the remaining five were hanged and burnt on the Gallow Green in Paisley.