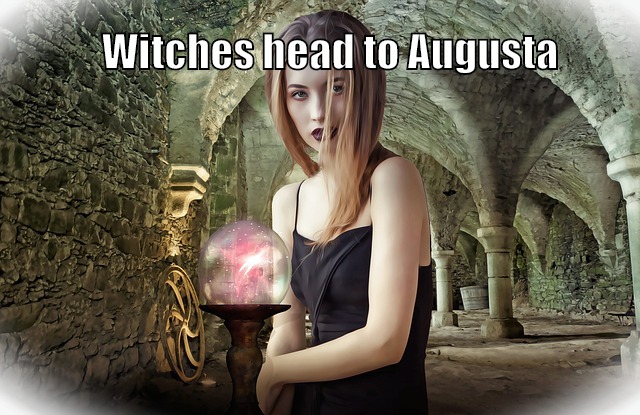 AUGUSTA — The Rev. Lady Haight-Ashton is proud to be a witch who is, in her own words, out of the broom closet.

She doesn’t fly on a broom, but does use them in her practice of witchcraft, as symbols, and not just to clean up, though they’re useful for that, too, she joked with the dozen or so attendees at her workshop presentation on witchcraft at the New England Metaphysical and Holistic Festival at the Augusta Civic Center Sunday.

Haight-Ashton, an author, teacher, psychic medium, dancer, member of the Maine Pagan Clergy Association and high priestess of Sacred Moon Coven, said she used to have concerns about people finding out she was a witch.

When she first joined  the West Lebanon Ladies Circle, a group of mostly older Baptist women who raise money to help people in need in the town of Lebanon where she and her husband live, because she, too, wanted to help people in need, she was worried what would happen if the other ladies in the group found out she practiced witchcraft. Then at one gathering of the circle of ladies she pulled out her tarot cards and, she said, they all lined up to have her do readings for them. She explained to them she is a witch, and, despite her fears, they still accepted her. She’s since been elected, and re-elected, as president of the group.

She assured attendees Sunday that while witches do have spells, they use them for good, not evil. She said that’s in part due to their belief in their “rule of three” in which anything they do, whether it is for harm or good, comes back to them threefold.

“We do not do harm, you only want to do good, because it comes back to you threefold,” she said. “We use our magic in harmony with the world. We do not do evil. We believe evil is against universal law. We think in terms of life and positive energy.”

She said she does like to wear black, because it absorbs energy, but also because it makes her look thin.

An example of a spell she has cast, Haight-Ashton said, was a spell to protect pumpkins she put out for Halloween — she was born on Halloween, by the way — after which the pumpkins lasted all the way through winter and into the next summer.

“Think of a spell as a thought, or a projection, or a prayer,” she said.

She noted she also believes in prayer, to gods and goddesses. Though she noted historically some Christian leaders have spoken out against witchcraft, out of fear. She said nearly everyone is familiar with the Salem witch trials, in the late 1600s, though she noted it is believed likely none of the people tried and found guilty of being a witch, and hung to death, actually were witches.

Haight-Ashton was one of several workshop presenters who shared their skills and insights with attendees at the two-day New England Metaphysical and Holistic Festival, which was in Augusta for the second straight year.

Other presenters included psychics and mediums, an animal communicator, a variety of holistic healers, contemplative dancers, experts on chakra and Reiki, herbal medicine practitioners, a hypnotist and a shamanic teacher.

“We’re a spiritual organization for anybody that comes with an open mind and a desire to learn more about themselves and the way we interact with the world,” said Jim Savage of New Gloucester, an organizer of the event. “People come here looking for something they can’t find anywhere else. That can be knowledge, it can be entertainment. Or it can be people looking for insight into themselves, from a reader or a healer.”

Isaiah Doble, 17, of Union practices Reiki, which he started learning four years ago, though he hadn’t planned on doing so at the festival, where he was just an attendee, not a presenter or vendor.

But when Tracy Ariette offered to conduct a bone reading — in which bones are thrown and the pattern they fall in is believed by some to give insight and answer questions – in exchange for him performing reiki on her, he agreed to the trade.

He described Reiki as channeling energy from the universe through yourself and into another person, so the energy helps heal that person.

“We both enjoyed each others’ services,” Doble said. “She understood my family, by reading about them. She got in contact with my ancestors, who are watching over me.”

Vendor Eva Goulette of Waterville sold children’s books about spirituality and pitched her Dancing Jaguar’s Spirit Camp, which she said is the only camp in the country teaching children holistically about mind, body and spirit.

The camp started in Waterville five years ago and, this summer, has sessions in Windham, Fairfield and Yarmouth in Maine, as well as in Virginia, Oregon, California and Mexico City.

She said the five-day camps teach children about locating their chakras and auras, about the power of stones to open blockages in chakras, about their power animals, inner awareness and their connection to the natural world.

Daisy and James Naumes of Durham, New Hampshire, sold numerous types of stone baubles including dragons, skulls and unicorns they make themselves in their business, Fairy Simple Baubles, with a variety of ground stones, resin and silver they combine in a mold.

Daisy Naumes, who is originally from Gardiner, said it took her about a year to learn the process. She said different stones have different healing properties, and those properties are not lost when the stone is combined with other materials.

Savage said attendance seemed down a bit this year, likely due to the hot weather, but said vendors and presenters told him those who did attend were very engaged in the festival.

He said the intent of the festival is to celebrate the spiritual, metaphysical, pagan and holistic healing community of New England.