In Ireland, archaeologists have found a remarkable monument in the heart of the extensive Stone Age complex of Carrowmore Megalithic Cemetery in Sligo. They were expecting to find a burial site or graves but instead found a most unusual monument that no one in Ireland has ever seen before. This mysterious monument is baffling researchers and it is hoped that it may ultimately yield insights into the prehistoric past.

The find was made in Carrowmore, County Sligo in the north-west of Ireland.  With up to 60 megalithic monuments recorded by archaeologists, Carrowmore Megalithic Cemetery is the largest cemetery of megalithic tombs in Ireland and regarded to be amongst the oldest in Europe.

The results of radiocarbon dating from the 1970s suggest that the oldest monuments at Carrowmore Megalithic Cemetery were built around 4600 BC, and more tombs were added over the centuries. Folklore, on the other hand, date these tombs to Ireland’s mythological past, asserting that they date to the Battle of Magh Tuireadh, where the Firbolgs were defeated by the legendary race of beings known as the Tuatha De Danann. 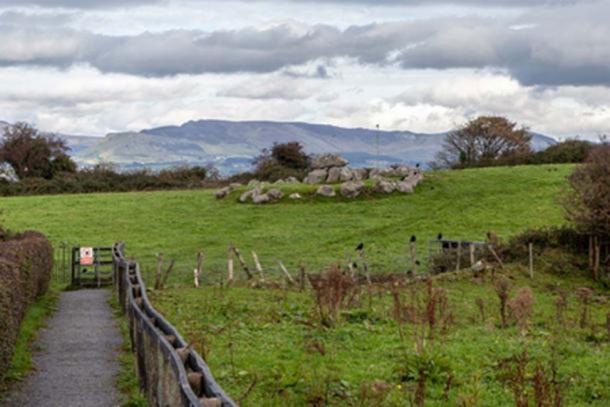 A satellite tomb with central dolmen at Carrowmore. This particular tomb is on private land and not accessible to the public. Credit: Ioannis Syrigos

The Journal reports that the mysterious monument was found by a team led by Dr. Marion Dowd and Dr. James Bonsal from Sligo’s Institute of Technology (IT Sligo).

They are the first to conduct an investigation of the site which conforms to international scientific standards. According to the Leitrim Observer, ‘in 2016, Dr. Bonsall and IT Sligo archaeology students carried out a series of geophysical surveys at Carrowmore’.

IT Sligo found a number of remains underground. In particular they identified a circular-shaped monument surrounded by a ditch which they initially assumed to be a barrow, a type of burial site or grave, in the heart of the Carrowmore complex.

The archaeologists found inside the circular monument a raised platform-like structure of the stone. This raised area was circular in shape and consists of a layer of larger stones. Moreover, ‘inside this was a sunken area with black, charcoal-rich soils’ reports the Leitrim Observer . The team was astounded by what they had found as it was clearly not a barrow and the monument was not used as a burial site.

“The center of the monument is quite raised and what we have is quite a wide band of stone going all the way around,” said archaeologist Dr Marion Dowd. “We had a whole series of stones laid out in quite a compact arrangement… These stones have been brought in from elsewhere and there is a deliberate effort to create this feature, this massive stone circular feature.” 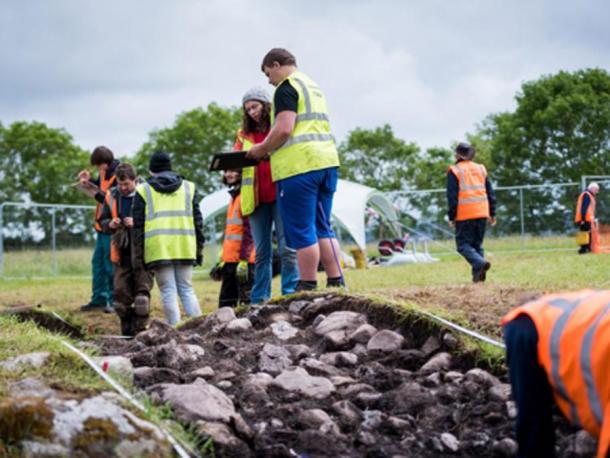 Part of the unusual structure discovered at Carrowmore Megalithic Cemetery. Credit: IT Sligo

Archaeologists excavated some 15 tons of soil from the monument and they shifted it all with a fine mesh. They found some 350 prehistoric objects and artifacts in total. The team from IT Sligo was determined to find every artifact from the trench.

They found a large number of prehistoric tools that are known as cherts and were crucial to prehistoric societies. They would have been used for a variety of tasks, such as making baskets, working bones, scraping hides and in the preparation of food. These cherts were essential for the survival of Prehistoric peoples. The Journal.ie  quotes Dr. Dowd, as saying that these stone tools were “essentially a prehistoric tool kit”.

The discovery of the cherts and the other artifacts are only adding to the mystery. These are items that experts would not expect to find in a cemetery.  There are no similar Irish monuments to the one discovered at Carrowmore. Archaeology.org quotes Dr. Dowd as stating that ‘“so far, we cannot find any parallel for it in Ireland”.  The team is hoping to find a parallel with another site in Europe to help them to understand their enigmatic discovery.

At the moment all that the researchers are able to state is that they have found an unusual and mysterious monument. The team has begun an analysis of the artifacts, and they hope that this can lead to some clues as to the identity and role of the monument. They expect to have the site dated by carbon dating in the coming months. This may help to solve the mystery of the circular monument and how it is related to the tombs at Carrowmore.