Celtic tribes celebrated Beltane to welcome the return of summer. Since at least the Iron Age, celebrations have included fire ceremonies, feasting, and fertility rites. Historically, the festival has been recognized throughout Ireland, Scotland, and the Isle of Man, and in many locations the night before May 1st still sets the scene for the fun and fascinating Gaelic May Day festival.

It represents the peak of Spring and the beginning of Summer. Earth energies are at their strongest and most active. All of life is bursting with potent fertility and at this point in the Wheel of the Year, the potential becomes conception. On May Eve the sexuality of life and the earth is at its peak. Abundant fertility, on all levels, is the central theme. The Maiden goddess has reached her fullness. She is the manifestation of growth and renewal, Flora, the Goddess of Spring, the May Queen, the May Bride. The Young Oak King, as Jack-In-The-Green, as the Green Man, falls in love with her and wins her hand. The union is consummated and the May Queen becomes pregnant. Together the May Queen and the May King are symbols of the Sacred Marriage (or Heiros Gamos), the union of Earth and Sky, and this union has merrily been re-enacted by humans throughout the centuries. 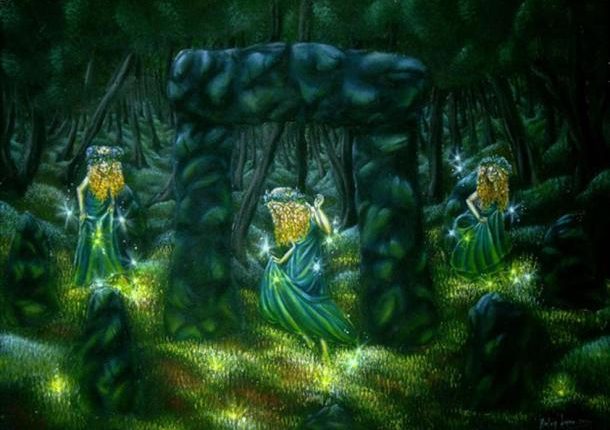 Beltane is an old Celtic Fire Ritual which celebrates, at the most fundamental level, the end of winter and the beginning of the warmer, lighter half of the year. It is the counterpart to Samhain, which marks the Pagan New Year and celebrates ancestors and the death of the crops (harvest). Beltane celebrates life. For the Celts, it was a festival that insured fertility and growth.

Beltane is one of the four major Sabbats in the Celtic tradition, the other three being Lammas, Samhain and Imbolc. Beltane’s traditional date, May 1st, was chosen as the midway point between the vernal equinox and summer solstice (two of the four minor Sabbats). Due to the change in the earth’s axis of rotation over time, this point is now closer to May 5th, and some pagans observe May 5th as “Old Beltane,” but the traditional date is still favored.

Beltane, much like Samhain, has changed over the years. Some traditions existed only in a single village, while others were found throughout the culture. It is believed that Beltane is a Celtic reinvention of an even older Roman festival, Floralia, which celebrated the goddess Flora and the flowering of spring. Most major religions have a holiday that marks the coming of spring. The Christian religion celebrates rebirth (or resurrection) on Easter; Easter eggs, Easter bunnies, chicks, and lilies are all pagan symbols of fertility associated with spring, adapted to the Christian tradition. The Hindu religion celebrates Holi, a carnival-like spring festival, dedicated to Krishna or Kama, the God of Pleasure. This festival resembles Beltane, with bonfires being a main focus of the holiday.

Traditionally, Beltane festivities began days before May 1st or “May Day,” when villagers traveled into the woods to gather the nine sacred woods needed to build the Beltane bonfires. The tradition of “May Boughing” or “May Birching” involved young men fastening garlands of greens and flowers on the windows and doors of their prospective ladyloves before the fires are lit Beltane night. As with many Celtic customs, the type of flowers or branches used carried symbolic meaning, and much negotiating and courting could be worked out ahead of time.

Many communities elected a virgin as their “May Queen” to lead marches or songs. To the Celts, she represented the virgin goddess on the eve of her transition from Maiden to Mother. Depending on the time and place, the consort might be named “Jack-in-the-Green” or “Green Man,” “May Groom” or “May King.” The union of the Queen and her consort symbolized the fertility and rebirth of the world.

Beltane may refer to the “fires of Bel,” in honor of the Celtic sun god, Belenus. Some pagans believe fire has the power to cleanse, purify and increase fertility.

Beltane is a celebration of the early summer, and in agricultural times it affirmed the fertility of the fields and the promise of a bountiful harvest.

Celebrations were held to honor the rebirth. The joyous spirit of the celebrations spread to homesteads with the use of May flowers to decorate doors, windows, sheds, and livestock. May Bushes or May Trees, often hawthorn, rowan, holly, or sycamore bushes or branches decorated with ribbons and flowers and sometimes candles, were popular features of Beltane celebrations in some parts of Ireland. In some traditions, people would try to steal each other’s May Bush for fun, but the practice was forbidden in Victorian times. The May Bush was sometimes burnt after Beltane ceremonies. This feature of the Beltane ceremonies could be related to the maypole that is often danced around in May Day or Midsummer celebrations in many parts of Europe.

As with all good celebrations, Beltane also included a feast. In 1769, Thomas Pennant wrote that a traditional food created over the sacred fire was the Beltane bannock – an egg, butter, oatmeal, and milk cake that was given to each person and also poured on the ground as a libation.

People would leave offerings of the Beltane bannock or other foods or drinks, such as milk, on doorsteps or at fairy trees or fairy forts for the supernatural aos sí (roughly translated as fairies or elves). This practice may be a nod to the previous practice of honoring and appeasing nature gods or spirits with sacrifices in return for protection and fertility.

Although the festival is traditionally associated with fire, as the years passed, Beltane became a popular time for people to visit holy wells and seek the healing properties commonly linked to those sites. The Beltane morning dew was also sought out and sometimes kept in jars by young women who believed it would make them more attractive, maintain their youthful appearance, and heal any skin ailments.

When the Beltane festivities drew to a close people would traditionally take some of the sacred fire to re-ignite their own homestead fires, carrying the positive aspects of the Teineigen into their lives and homes too. 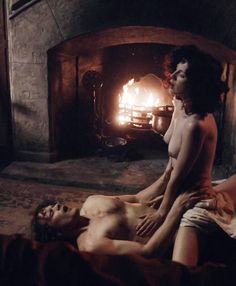 Beltane has long been associated with sex. While many witches celebrate it without any overt sexual acts, that’s not always the case.

Beltane honors Life. It represents the peak of Spring and the beginning of Summer. Earth energies are at their strongest and most active. All of life is bursting with potent fertility and at this point in the Wheel of the Year, the potential becomes conception. On May Eve the sexuality of life and the earth is at its peak. Abundant fertility, on all levels, is the central theme. The Maiden goddess has reached her fullness. She is the manifestation of growth and renewal, Flora, the Goddess of Spring, the May Queen, the May Bride. The Young Oak King, as Jack-In-The-Green, as the Green Man, falls in love with her and wins her hand. The union is consummated and the May Queen becomes pregnant. Together the May Queen and the May King are symbols of the Sacred Marriage (or Heiros Gamos), the union of Earth and Sky, and this union has merrily been re-enacted by humans throughout the centuries. For this is the night of the Greenwood Marriage. It is about sexuality and sensuality, passion, vitality and joy.

All of those mostly public rituals had sexual overtones to them, it’s nearly impossible to celebrate Beltane without at least a casual glance towards coupling, but we always tried to keep it down to a John Hughes-80’s teen angst level. There were courting rituals with the Maiden playing hard to get, and the Goatboy** doing his damnedest to be charming (and usually failing, at least for a while). I’ve written rituals with guys chasing girls (and girls chasing guys), reminiscent of school-yard games of too long ago to think about now.

Beltane is celebrated as the day when the courtship of the Maiden and Horned Youth was consummated. The most powerful confirmation of that joining has always been (to me) the Great Rite. I sometimes feel as if the Great Rite is something glanced over in ritual, “Look at me I’m putting my knife in this cup!” but to me it’s always been one of the core expressions of Pagan Spirituality. The symbolic Great Rite at Beltane is an obvious sexual concept. the moment; an acknowledgment that the Earth is again renewed through the two polarities of male and female. It’s overtly sexual and obvious without needing a detailed explanation.

Beltane is the festival of the Sacred Union of the Goddess and God. It’s a deeply joyous affair, celebrating sexuality on many levels, its rites ultimately honoring our striving for that union of the Divine Masculine and Feminine deep within us. I always think of it as exploring that magical process when we truly open to another – just as the blossom to the bee – and in the surrendering of that boundary become something more than ourselves. Love and sex bring us some of our most profound experiences; some ecstatically joyous; others deeply painful – but at best they open us and let the mystery of another’s being flood into that intimate, hidden space, changing us.

Sex can be the most meaningless of acts, a superficial if pleasurable sensation; it can be a battlefield, the most painful wedge of separation between two people; it can also be a gateway to another’s deepest being, a connecting force between the soul of one to another; it can bring an intensity of emotion and feeling that blows life as we know it apart – all known signposts gone – and from this intensely vulnerable and alive place, a new potential of being can be born. Spiritual sex, sex that engages the body, mind emotions and soul surely takes us to the Divine within, shows us most vividly a glimpse of that Divine Union that we strive for within us, the union that Beltane is ultimately about.