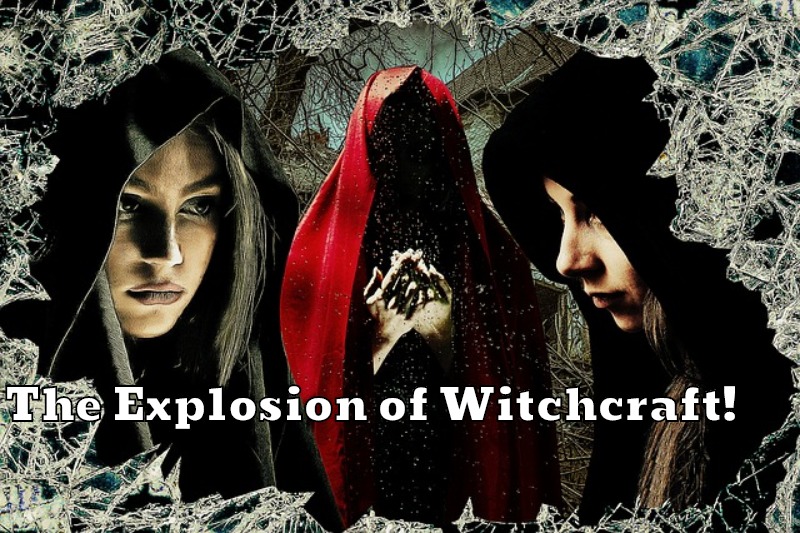 To say witches are having a moment — as the teenage protagonist of The Chilling Adventures of Sabrina did in a recent episode — would be an understatement. Between Sabrina and American Horror Story: Coven, Suspiria and The Love Witch, there sure has been a lot of witches in movies and on TV recently. Add to that the proliferation of witchy imagery on Instagram and Tumblr, and the resurgence of astrology, tarot, and other holistic and metaphysical activities as tools for self-care, and it’s clear that people are enchanted and empowered by the rich symbolism of this movement. That this witchcraft Renaissance happening now is notable: Many women are justifiably angry, and so what if they just want to hang with their besties to binge-watch horror movies, eat cookies, brew potions, and hex the President?

Pam Grossman, host of the podcast The Witch Wave, has been exploring and researching the history of witchcraft for years now. Before launching her podcast in 2017, she created the occult blog Phantasmaphile, and wrote the short-but–lovely book What is a Witch, an “illuminated manifesto” about witchcraft through history. Her new book Waking the Witch, titled after a haunting song by Kate Bush, explores witchcraft’s origins, significance and expressions in popular culture. Subtitled “Reflections on Women, Magic and Power,” the book is part memoir, part cultural critique, and part exploration of why and how the witch figure is resonating so powerfully now.

“Social media has been a huge driver for this, and it’s obviously crescendoing,” Grossman tells me in a phone interview. “For some people, it’s more about the fashion or some other aspect of the culture of witchcraft. But I don’t think that should be trivialized. People are gravitating towards this archetype that represents the female experience in all its complexity, light and dark. More people are also wanting an alternative spiritual experience outside the framework of organized religion, and I think witchcraft provides that.”

Grossman and I are both practicing witches, and we both lived through the intense witchcraft boom of the late 1990s, which took off, in part, because of the cult filmThe Craft, released in 1996. The film was a somewhat cautionary tale about dabbling too far into the magical for selfish reasons, but its ultimate message about “natural” (i.e., born with it) witchcraft was powerful, and it inspired thousands of teenage girls and women to explore Wicca. The internet was still in its infancy, and social media as we now know it was nonexistent, but girls and young women were able to network and order books and share their thoughts online without having to worry about being punished by parents or bullied by peers. As witchcraft has grown more mainstream, the general public has become a bit more savvy, understanding that Wicca is a religion and that witches aren’t devil worshippers — recent episodes of CAOS notwithstanding.

“More people are also wanting an alternative spiritual experience outside the framework of organized religion, and I think witchcraft provides that.”

“Chilling Adventures of Sabrina is definitely having a huge influence on young people,” Grossman says. “It’s so unapologetically inclusive and feminist, with transgender characters and representations of different sexualities. But the best thing is the show’s main thrust — how Sabrina tries to overthrow the patriarchy in the Church of Night. It’s really sly in its message. Some people think it’s giving Wicca [the acronym W.I.C.C.A. is given to a school club formed by Sabrina’s friends, the Women’s Intersectional Cultural and Creative Association] a bad name because of all the satanic elements, but the whole point is that it’s satire. Even the devil is a completely patriarchal figure.”

Indeed, Sabrina’s snarky rebellion against the patriarchy is a spirited approach that effectively balances the portrayal of the resistance efforts in, say, The Handmaid’s Tale (a show that features some subtle parallels to the Salem witch trials), where resisting is dangerous and terrifying, yet still necessary. The fact that Sabrina can just openly defy Lord Blackwood is a stark contrast to Offred’s need for secrecy and caution, but both shows offer models for resistance based in witchy wiles. As witchcraft beliefs and practices become more familiar to the general public, there’s an increasing number of films and movies ready to capitalize on the craze, portraying witches not just as figures of fantasy or horror, but as women with real life attributes and problems.