My grandmother was a witch: a species of santera from Havana, to be more exact. Not like she was decapitating chickens all over the place or anything, but she did speak in tongues and believe in demons, and in hell and especially, in the Devil, who held a good deal more sway over her beliefs and activities than God or Jesus ever did, as it still seems to me. Only now do I see the intensity of her superstitions, her prayers and novenas, her gloomy foretelling of the future, her brooding certainty about every damn thing — the evil eye, the dangers of lust, the malevolence of the occult powers roaming the world, the corresponding benevolence of saints, the rightness of the iron fist with which she ruled us all — as based in fear. Mimina died of liver cancer when I was ten, so all my memories of her are tinged with my childhood concept of her as limitlessly powerful, awe-inspiring and wise; on reflection, this earlier impression has not been entirely displaced by the later one.

Mimina was a high-drama lady, very beautiful in the face and terrifically fat; Cuban women tend to be generously padded (particularly in the caboose, traditionally), but Mimina really was immense, which only added to her general air of formidability, as if she were a female Count Fosco. She had the most gorgeous skin, clear and luminously pale, though she smoked quite a lot; her eyes were dark, bottomless beautiful pools of dangerously intense emotion; sadness, pleasure, concentration. She had a gravely elegant way of moving, too, for being so big. Everything about her and her little house and garden was modest in its origins but splendidly beautiful, interesting, intimidating, luminously clean and correct. She was a simply marvelous cook, the best I’ve ever known. When we were little, my cousins and I wouldn’t permit our own mothers to fix us so much as a peanut-butter sandwich, if Mimina were around. She had the most beautiful hands I’ve ever seen, white and velvety as lilies, blue-veined and delicately exact in all their movements.

She was expertly skilled at so many things. Embroidery, laundering, ironing. These may be humble tasks but they are also very difficult to perform perfectly; there was such refinement and subtlety in all she did. I don’t believe there can be many people left in the world who can iron the way my grandmother did (though my aunt is one); maybe that kind of attention to detail has diminished with the transfer of women from the prison of housekeeping into the prison of wage-earning.

Everyone in my family basically worshipped Mimina, and was also freaking terrified of her. How come? Because in addition to being a very lovable, affectionate and brilliantly attractive person, she was cruel, a control freak and batshit crazy. If anyone were to attempt to gainsay or cross her in the smallest thing, she would create a living hell for that person in an instant. Even one look of displeasure from her would cause the doughtiest uncle to collapse into a pile of quivering jelly. Nobody quite knows how witches do their thing. But everyone in her orbit came to obey this one without a moment’s thought.

Once in a great while, a tiny little mutiny would break out. I remember one, over Sunday lunches; a terrible business. The whole family was expected to gather for this ritual of Sunday lunch; no, expected is the wrong word entirely, it was a natural law, like gravity or the boiling point of water. The men in the living room would watch the game, the women were in the kitchen, cooking; they would come together for lunch and then afterward hang around together, have a small drink perhaps, listen to records, maybe dance a bit.

I forget which apostate it was who attempted to make other plans one Sunday afternoon, but I do remember the results being along the lines of those following the assassination of the Archduke Ferdinand. There were threats, raging, screaming, angry phone calls, vows, an avalanche of guilt-tripping, expertly deployed, quiet expressions of disappointment (perhaps the worst of the lot) — a reign of terror. Mimina quelled the uprising (as I, an eight-year-old, could have told them in advance was a foregone conclusion) and nobody ever failed to show up for lunch again.

I’ve never really understood whether the Devil frightened my grandmother into being such a terror, or whether the Devil was just a name for the terrors that were already in her, for reasons I won’t ever know. In any case, she seemed to believe that we’re all of us born with the Devil inside us, a dark, bloody, sexually explicit figure, half torment and half pleasure, the source of every appetite, every selfish impulse; we were made to be corrupted, but grace has to be fought for every day of your life and never, ever really attained.

We’d be sent to my grandparents’ house for the weekend once in a while, when our parents would pop over to Las Vegas. In retrospect it is a miracle that they didn’t all paste themselves to the center divider of the freeway, back in the long-ago day. Everybody was drunk as hell back then and they all smoked like fiends and never slept all weekend, as I recall. Our parents were beautiful and entirely unhinged. During these weekends we would play under my grandmother’s gimlet eye and be spoiled with lovely meals and watch enormous amounts of TV. There was a terra-cotta planter outside where we would mix magic potions. Many years later I returned to the house and was amazed to find it the size of an ordinary planter, just tiny; in my mind’s eye it had been enormous. Such is the power of magic.

If any of us got sick my grandmother would do witch things to us. This meant candles in a darkened bedroom, for example if you had tummy trouble. You’d lie down on the narrow bed in the candle-lit room, and Mimina would pray (just regular Hail Marys, in Spanish) and make a cross in oil on the tum or other affected area. You’d be all well in an hour, or maybe two, after a little nap.

The most compact way to explain Mimina’s Devil side might be to recount the story of her oldest daughter’s marriage. This daughter, my aunt, was seventeen on her wedding day; unaccountably, she married a total bumpkin from the sticks in Cuba whom I never was able to stand, because he was so mean to her always. In an access of annoyance with this man, to my everlasting shame I once flippantly advised my aunt, whom I love very much, just to give him loads of extra heart pills because he took a bazillion pills in any case, and who would ever know? I mean, it was pretty obvious I was kidding (angry-kidding) but now he really is dead, and I feel a little bit bad. 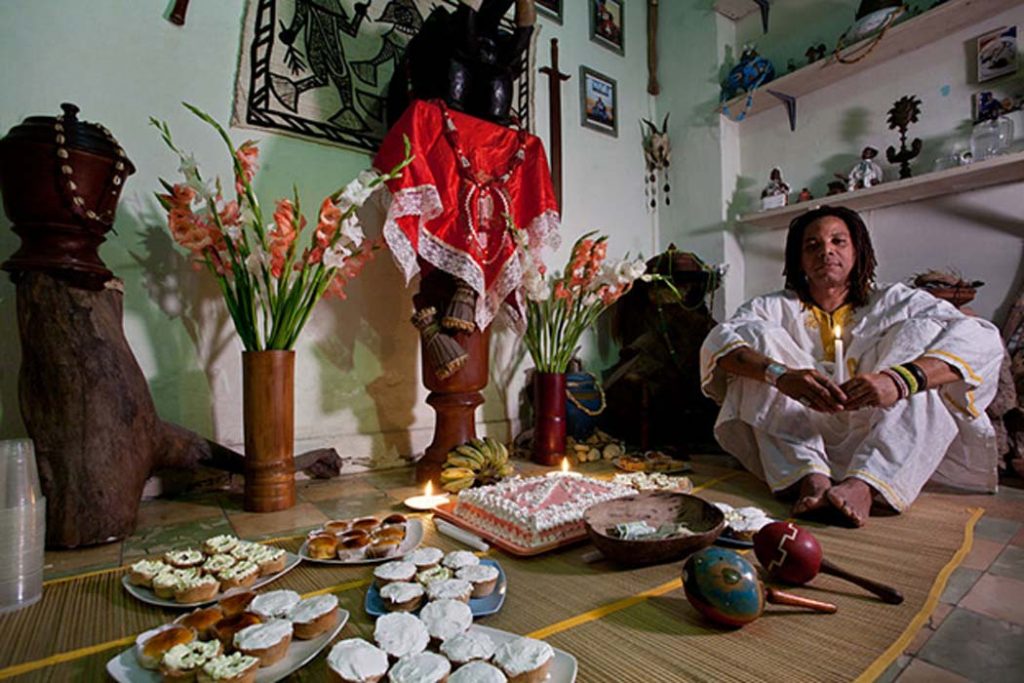 Many years later I returned to the house and was amazed to find it the size of an ordinary planter, just tiny; in my mind’s eye it had been enormous. Such is the power of magic.

In any case, my aunt stayed with this man forever, until he died, which was about a zillion years even though he was always horrible to her, and he was the father of my beloved cousin T. so that is something at least, but the point I am at last about to make is that not only did my grandmother send her seventeen-year-old daughter to live with this godawful man, she failed ENTIRELY to supply the remotest explanation as to what would be happening to her daughter that night. As in, at all. My aunt seems to have had a vague suspicion that nudity was involved, though even that is a little unclear. But other than the one unclear-sounding detail, my teenaged aunt was launched forth into the awful majesty of the marriage bed in absolute and total ignorance of what was about to go down.

Which, if that isn’t the witchiest thing you ever heard, worthy of the Blair Witch herself, I don’t even know.

Until you hear that my grandmother was herself fourteen when she was married.

Except that it was to my grandfather, who was ten years older than she, and who was a glorious person in all respects, who worshipped her, and whom anyone could love.

The point is, they were all crazy. Were they so afraid because they’d left their home in 1958, and everything they’d grown up with was ruined now, a mess forever? Maybe the Devil meant those uncontrollable and malevolent forces that gathered like a wave or an earthquake, far away, and then rushed in to smite us.

There is never a representation of the Devil in a Catholic church, nor in a Catholic household. Even pictures of the ordinary horns and tail type Devil were enough to make my grandmother gasp with anger. She would discuss him as if he were a person. A person with intentions and ideas, whose ways she knew something about.

Santería is a hybrid, as you may know, of the West African Yoruba faith and the Catholic one. Yoruba deities were kind of merged with the saints in order to, what, I don’t know. Okay, your lightning god Chango (or Shango) is our Santa Barbara! Fine, now that’s settled. The best thing about it is the music.

Santa Barbara’s day is the fourth of December (each saint has a saint’s day) and my mom used to have a big party on that day every year and wear a red dress, because that’s Santa Barbara’s color, and late in the evening play this fantastic song which turns me into a starkly Cuban female every time and I dance pretty much just like that, I’ll have you know. No, seriously, I really do. All the women in my family dance in that instantly recognizable Cuban rhythm.

Anyhoo. Ugh, I shan’t bore you with the things that drove everyone nuts about my grandmother, that wicked witch whom I loved so dearly. Why should I dwell on all that? The humiliation and fear, the refusal to let my beloved cousin T. go to UC-Irvine because girls are meant to find a nice man and have babies and maybe work at a bank? The tears. Instead, I shall tell you that when you went to my grandmother’s house you would find on various surfaces, on tables and shelves, little wasp-waisted shrimp cocktail glasses full of water and sometimes roses from the garden, set before photographs of the dead.

There were many painted plaster polychrome saints with coins piled before them. One had a boat filled with supplicants beneath her, struggling through plaster waves. Coins in the boat. The scent of flowers and food, the sound of voices. The warm and perilous embrace of a witch.