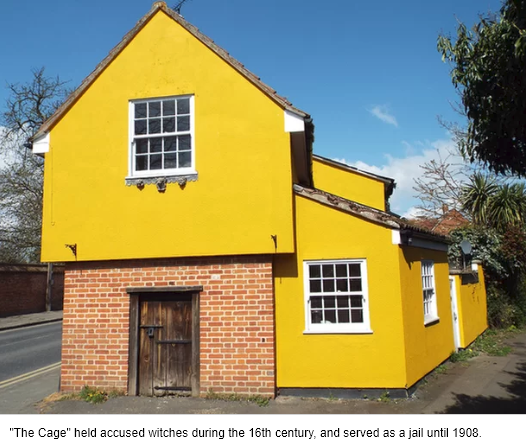 A small building in England that was once a medieval prison for people accused of witchcraft is now a cozy home in need of an owner.

But prospective buyers should be forewarned: The sordid history of the former jail, known as “The Cage,” has led many to claim that the house is haunted, with some calling it the most haunted house in England, British real estate agency Home Domus 360 wrote in a listing on Facebook.

“With a reputation attracting TV crews from around the world, this unique 2 bedroom cottage comes available with many resident ghosts,” Home Domus 360 representatives said on Facebook.

Located in St. Osyth in Essex, U.K., the building was recently placed on the market by owner Vanessa Mitchell; this is the third time that Mitchell has tried to sell The Cage since moving out in 2008, according to local news outlet The Clacton and Frinton Gazette. Mitchell reportedly fled the house in 2004 and moved elsewhere after seeing “mysterious blood spatters” and being “physically attacked” by malevolent ghosts — one of which was “a satanic-looking goat,” Mitchell told The Gazette.

During the St. Osyth witch trials in 1582, 14 women were accused of witchcraft-related crimes, for which three were executed, the East Anglian Times reported. During the trials, the women were housed in The Cage. One of the accused, Ursula Kemp, was a local healer who was sentenced to death by hanging; she is commemorated in a plaque that hangs on one of the former prison’s walls.

Kemp was accused of casting spells that led to the death of a neighbor’s newborn. She then accused others of practicing witchcraft, and they, in turn, accused even more unfortunate individuals, according to the Times. Essex was a hotbed of witchcraft trials during the 16th and 17th centuries — of the 112 witches who were executed in England in the 1640s alone, 82 were put to death in Essex, the Times reported.

In 1921, two female skeletons that were thought to be the remains of executed witches — one of them reportedly Kemp — were unearthed in a St. Osyth garden during a construction project. Some of the bones appeared to have been pierced with nails, a common practice for dead witches to keep their spirits from haunting the living, according to the Times.