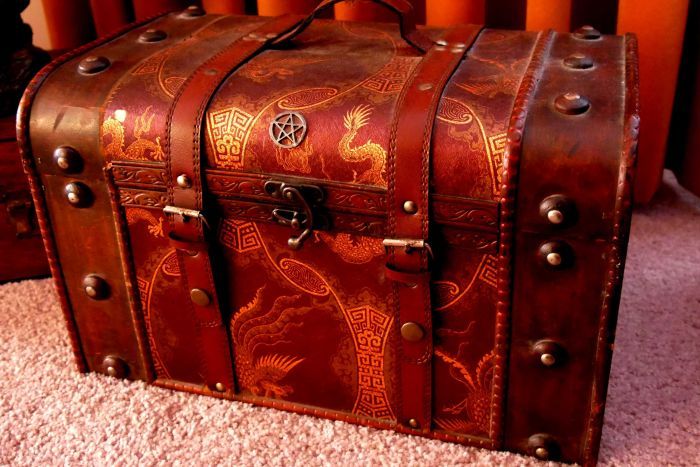 “Love, health, acres, wealth. All the fires come alive,” — this is just one of the many spells scrawled in the pages of a Tasmanian witch’s book of shadows.

Diana Craig was born into a Catholic family but has been a pagan for as long as she can remember.

Ms Craig’s shift towards a more ancient belief system stemmed from wanting to go to church on Saturday instead of Sunday but her grandmother refused to take her.

Her uncle suggested she go and sit under a tree in the backyard to speak with God instead of going to pray with her local priest.

“He would tell me God made the trees and [the priest] around there just wants money for wine,” Ms Craig said.

“My grandmother would get really upset about him saying that because it’s blasphemy and you’ll burn in hell.”

As a result, she spent a lot of time sitting under trees and less time in church.

PHOTO: Diana Craig has been a pagan for as long as she can remember. (ABC Northern Tasmania: April McLennan)

Another 6,616 people identified as Wiccan while 829 were druids, a nature-based belief system stemming from ancient Celtic times.

Professor of Sociology at the University of Tasmania Douglas Ezzy, said Tasmania had the largest number of pagans per capita in Australia.

“I think it’s largely a product of the fact that pagans tend to be mostly Anglo and Tasmania has a smaller number of migrants.”

Professor Ezzy said while the essence of paganism centered around belief structures, rituals were also important.

“There are lots of little traditions that happen within the mainstream community that actually have pagan roots,” Ms Fruin said.

“I think a lot of those little folk-laws, rituals and ceremonies still have an undercurrent here in Tasmania.”

Rowan Ricchi, who was raised a pagan in Launceston, also agreed.

She puts her right shoe on before her left and at night she leaves the shoes in front of the fireplace to stop evil spirits coming down the chimney.

“I have shoes in the attic so the kids will find their way home all the time whenever they wander out in the world,” Ms Ricchi said.

“When I sweep the kitchen floor I put salt in the corners to collect any negative energy hanging out there and sweep it out the back door.”

Ms Ricchi raised her three children with pagan values but now as young adults aged 17, 18 and 20 they were free to choose their own beliefs.

One has chosen the Greek pantheon, another the Nordic gods and the other has embraced an unexpected belief system.

“One of them is looking at, believe it or not, Pokémon as a form of religion and I have no right to say, ‘Oh that’s a stupid religion’ because it’s not,” she said.

“To him, it’s the most important thing in the world.”

“There’s a small number of them that I know of where their parents were pagans and they were bought up as pagans and now as young adults, some of them are into their 30s now, they think of themselves as pagans.”

When raising her children, who are now adults, Diana Craig said she exposed them to the traditional and pagan celebrations for Christmas, Halloween and Easter.

“They’d have it at the right time of the year, but they would also have it with all the muggles [non-magical people],” she said.

Ms Craig said that could take some explaining with the children because the equivalent pagan event could have a different meaning.

“It’s not Halloween … it’s Beltane — it’s the festival of sex and love and fertility,” she said.

The emergence of the pagan community in Tasmania has brought about monthly ‘pub moots’ in Hobart, Launceston, and Burnie.

The low-key events unite dozens of pagans in the state who gather around the table, share a meal, discuss beliefs and topics from convict magic traditions to Native American iconography.

For some, the get-togethers are enough to spark an interest in the religion.

But for others, like magician David Walker, an introduction to paganism can result from an unsuspecting, chance encounter.

While walking home from school — and wearing a Celtic cross — he was invited to a party where he met a range of “unusual” characters.

“There was a young guy walking around bare foot with pointed ears,” he said.

“He told me that he was an elf. He was wearing really weird clothes like I had never seen before.

“There was another guy and his spirit animal was Jesus and he was really big on all types of old scriptures and [Native American] kind of stuff.”

Mr Walker said at first he found the experience unusual, but he was intrigued by the pagan community.

“I first got into channeling, where people wrote about drawing spirits down into them [their bodies] and then producing books,” he said.

“You can get a spirit to actually write a book for you.”

Paganism may not appeal to everyone, but Ms Ricchi said she has never felt discriminated against.

“Perhaps we weren’t invited to Christmas parties as often as other people were, but we were busy having our own fun, so it didn’t really matter,” she said.