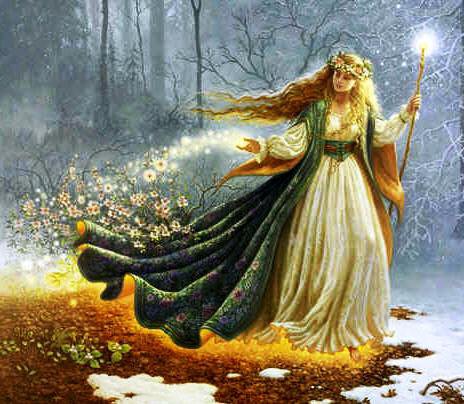 Ostara is one of the eight sabbats (Wiccan holidays) on the Wiccan Wheel of the Year. It’s one of the four minor sabbats which fall on the equinoxes and solstices. It is the zenith of springtime and we’re well on our way to summer. That means a lot of work and preparation, as well as a lot of relief. The day hangs in perfect balance with equal amounts of light and dark, but this is the when the light half of the year overtakes the dark half, bringing with it all the hope and promise that spring signifies.

Ostara is the sabbat of new beginnings. It gets its name from Eostre, the Germanic goddess of spring. Looks a lot like the word Easter doesn’t it? That’s because the Christian Easter is based on this sabbat. Originally Ostara was celebrated by Germanic pagans, from which the name derives, not Celtic pagans and druids. Today, however, most pagans celebrate the coming of spring with a variety of rituals and festivities.

Ostara is a celebration of the fertility of the Earth and is celebrated during the Vernal equinox, when day and night are the same lengths, marking the end of Winter and the first day of Spring.  Symbolically, it is seen as a return to harmony and as a time to celebrate fertility.  In the Northern hemisphere, the vernal equinox occurs in March; in the Southern hemisphere, it happens in September.

‘Ostara’ is the Germanic Goddess of the Spring and the Dawn.

The pagan Anglo-Saxons (before the influence of Christianity) held festivals in her honor.
She is also mentioned in several inscriptions in Germany, and the modern holiday of ‘Easter’ – originally the name for the spring Equinox, but later subsumed to the Paschal calendar for the Christian resurrection holiday – is named for her (the Christians have always had a nasty habit of ‘hijacking’ customs, festivals, sacred sites and even whole cultures for their own uses).

The name “Eostre” (Old Germanic “Ostara”), is related to that of Eos, the Greek goddess of Dawn, and both can be traced back to a Proto-Indo-European and Aryan goddess of the Dawn, however, ultimately Ostara’s origins continue to remain a mystery.

Her true mystery, however, is evident every year.

She is the first warm spring winds, the birds that return, the trees that bud and curl forth leaves and flowers.

Ostara is the personification of the rising sun. In that capacity, she is associated with the spring and is considered a fertility goddess. She is the friend of all children and to amuse them she changed her pet bird into a rabbit. This rabbit brought forth brightly colored eggs, which the Greek goddess gave to children as gifts. From her name and rites, the festival of Easter is derived.

Indeed, in his 1835 book Deutsche Mythologie, Jacob Grimm states that “the Easter Hare is unintelligible to me, but probably the hare was the sacred animal of Ostara … Ostara, Eástre seems, therefore, to have been the divinity of the radiant dawn, of upspringing light, a spectacle that brings joy and blessing, whose meaning could be easily adapted by the resurrection-day of the Christian’s God.”

Today, many pagans celebrate Ostara by sowing seeds, tilling gardens for late spring planting, and celebrating the balance of light and dark as the sun begins to tip the scales toward summer. This is the time of renewal, rebirth, resurrections, and new beginnings. Celebrate the coming of spring and life returning to our beautiful Mother Earth.

Food plays an important role in the observance of Ostara. The fresh vegetables beginning to become more widely available at this time of year are frequently eaten, while some witches are known to fast on the holiday, to clear the toxins built up in their bodies over the cold winter months.