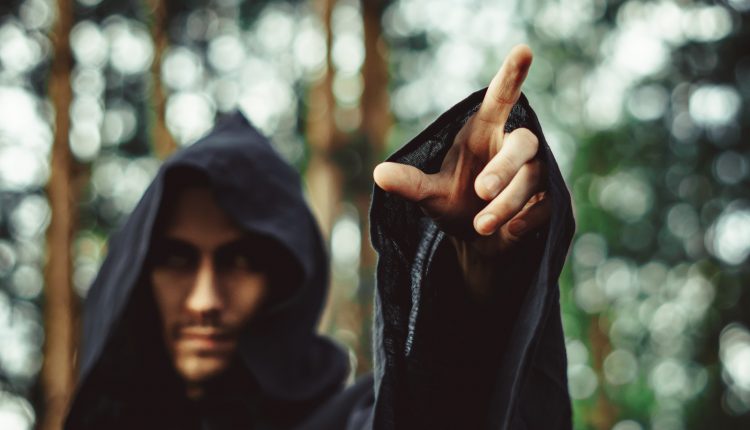 The State of the Male Witch

Ask anybody to name a witch and the first name out of their mouth is bound to be a woman’s one. Rightly so: from the Shakespearean times of The Tempest all the way through to the practice’s 20th century pop cultural revival, courtesy of Sabrina the Teenage Witch, The Craft, and an iconic turn from Bette Midler in Disney’s Hocus Pocus, ‘witch’ and ‘women’ have been bedfellow phrases.

From an outsider’s perspective, the space has been so dominantly female-led for the best part of 500 years that it’s surprising any dudes have been operating in those circles at all. But despite being almost non-existent in popular culture, there are many men who identify as witches in 2020.

ON WHAT WITCHCRAFT MEANS TO HIM

I’ve been practicing witchcraft for roughly 25 years, the last 10 of which professionally. I started off in Wicca groups, which is like modern neo-Pagan spiritual practices, popularized by people like Scott Cunningham and Gerald Gardner. I got a lot out of it, but I’ve moved away from that and went what they call “solitary,” where I went out on my own to explore the world to see what was available to me with magic.

I had the pleasure of learning from a lot of people in the Pagan community that came up in the 1970s and 1980s and got to test the waters with a lot of different things — magic evolved for me as a meditative, energetic practice. It helped me define who I am as a person and gave me agency in the world.

Historically stories of the occult and womanhood have fed into one another for centuries. In the 1400s, early records show that over three quarters of those engaged in witchcraft in Europe identified as women. Those figures are much the same now, even if the overall numbers (around 100,000 back then) have imploded into the millions now. It is, even with a smattering of men involved, a divinely feminine space, but that historical image of women conjuring spells, sprinting around forests in the nude and generally condemning men to hell in peace is a confused one, because the narrative surrounding witchcraft is closely tied to the hunts that demonized the occult for centuries. In essence, those witch hunts were a form of gender-based oppression based on the assumption that only women were part of the problem; they were sexually dangerous, capable of worshiping a different deity or trusting in nature and spirits to solve our problems rather than a male God.

Scott told us, “I had an incredible mom who really encouraged it in me when I was little. I had imaginary friends, and I’d call things out before they happened. I’d tell my mom that people were saying different things in their head than they would with their mouth. When I was 12 or 13, I began reading whatever I could find in the library, and once I hit that road, that was it. I went to as many classes, talks and events as I could. I volunteered at an occult shop.”

The founder of Olde Ways Apothecary, Michael is an initiated witch with two decades of experience, specialising in spellwork. He’s well versed in the syncretic religion of Espiritismo, an Afro-Latino branch of witchcraft that he inherited from a number of women in his life, namely his grandmother, who was his idol growing up. “She used to have a line down her hallway of women waiting for tarot readings,” he reminisces. “From then on, I was immediately attracted to it and tried to get as much information as I could about what she did. She was trying to tell me to (leave her be), but I knew that what she practiced was a part of me. If someone was sick when I was a kid, I’d pray for them or make them some sort of tea. I wanted to heal and help people, and would see spirits. No one ever shut that down for me.”

That the vast majority of those around him practicing witchcraft were women didn’t hit Michael until later in life. “When I got older and people started telling me: ‘You’re not a witch because you’re a boy. You’re a warlock or a wizard’.” It’s likely that pop culture – namely boy wizard Harry Potter – played a notable part in most people coming to that closed-minded conclusion: that all women who practiced witchcraft were witches, and all the men who did the same were wizards. So why do most male witches reject those titles, and what’s the difference anyway?

Well, contrary to popular belief, the word ‘witch’ doesn’t carry a gender – “it’s a verb,” Michael points out, “something you do”. While witches mainly specialize in healing the sick and manifesting love through spells (the less spectral things) wizards are predominantly Celtic figures who act as spiritual guides and mentors. And as for the word warlock? Best avoid it. “It’s a term that was used if someone broke their oath,” Michael points out. “If someone was facing imprisonment for witchcraft, and someone sold you out, that person would be a warlock.”

And those famous witch hunts weren’t really all about women.

Not only were many thousands of men tried and executed as witches, but in countries like Normandy, Estonia, Burgundy, Russia and Iceland, more men than women were prosecuted for witchcraft.

Even Heinrich Kramer and Jacob Sprenger’s infamously misogynistic witch-hunting manual, the ‘Malleus Maleficarum’ (1486) acknowledges the existence of male witches. Although Kramer and Springer believed “a greater number of witches is found in the fragile feminine sex than among men”, they still devote an entire section to three types of witchcraft practiced by men, the most important of which was magical archery (shooting at crucifixes and that type of thing.)

In Iceland, between 1625 and 1685, 92 per cent of those prosecuted for witchcraft were men, the most infamous trial being that of a father and son named Jón Jónsson in 1655, known as the Kirkjuból witch trial. When the Reverend Jón Magnússon began waking in the night to the sensation of cats and mice crawling over his feet, of a dog with red hot claws pinning his body to the bed, he had no doubt that he had been bewitched. What was more, Magnússon was certain he knew who was behind his torment. When his night terrors began, the older Jón Jónsson, while drunk, had admitted he had sent a spirit to taunt the reverend. Magnússon became convinced that the father and son were cursing him because a few weeks earlier he had been forced to reprimand the younger Jónsson for punching a woman in church. This was all the evidence Magnússon needed that the Jónssons were out to get him and he took his case to the sheriff in Súðavík.

Magnússon claimed the Jón Jónssons were possessed by the devil and called upon various members of his family to testify to his suffering. The father and son were ordered to publicly swear an oath to God that they had never colluded with the devil and that they would renounce any further acts of witchcraft. Initially, everyone was happy with the ruling, but when Magnússon’s night terrors continued the Jón Jónssons were brought back to trial. Unable to produce enough witnesses to testify to their innocence, the Jónssons were thrown in jail and after seven months they were willing to confess their crimes. Not only did they confess to tormenting Magnússon in his sleep, but also to keeping a book of spells, killing cattle, poisoning beer, and creating ‘Fretrúnir’, or fart runes – a powerful curse that causes its victim to fart uncontrollably. For their crimes, both men were burned at the stake on April 10, 1656. Overall, between 1625 and 1683, around 130 people were brought before Icelandic courts accused of witchcraft. Of that 130, 21 were executed – 20 men and one woman.

In Russia, approximately 75 per cent of those accused of witchcraft were men. Explanations for this vary from Russian Orthodox Christianity’s interpretation of witchcraft to the influence of Viking colonisation, but when historian Valerie A. Kivelson analysed 250 Russian witchcraft trails she found that a significant subset of the accused were itinerants known as the ‘guliashchie liudi’, or ‘wandering people’; minstrels, monks, seasonal labourers, peddlers, freed slaves, and so forth. Although women could be wanderers as well, men were far more likely to roam the country looking for work and it seems that this social subset were heavily stigmatized and therefore more closely associated with witchcraft than any other.

Between 1564 and 1660, over 70 per cent of the 380 known witchcraft defendants in Rouen, Normandy were men. In Normandy, the archetypical witch was not an old woman or a wanderer, but a shepherd. In fact, nearly half the men accused of witchcraft in the Pays de Caux region of Normandy were shepherds (28 out of 59). As late as 1703, the Rouen Parliament sentenced three shepherds to be burned to death for “having broken down a church door at night and carried off some Hosts from the tabernacle as well as holy water from the baptismal fonts”. Why shepherds? No one is quite sure, but it is thought that their association with the wolves that hunt their flocks and the long nights spent out in the wilds had something to do with it.

Surprisingly (or perhaps not), clergymen account for around 10 per cent of those tried for witchcraft in 17th century Normandy, and at least six priests were executed in Rouen between 1598 and 1647. In Britain, around 80 per cent of those accused of witchcraft were women, but on 27 August 1645, we also executed a priest.

The Reverend John Lowes of Brandeston, Suffolk was 80-years-old when his parishioners had him arrested for witchcraft. A cantankerous and deeply unpopular preacher, this wasn’t the first time Lowes had fallen foul of his neighbours’ anger, but it was the first time he had come under the authority of the self-styled ‘Witch Finder General’, Matthew Hopkins. In just two short years, Hopkins is believed to have overseen the arrest and execution of 300 people on trumped-up charges of witchcraft. He was paid handsomely for every witch he uncovered, and although torture was illegal, Hopkins was prepared to break the law to secure a confession.

Records tell us that Hopkins “kept [Lowes] awake several nights together while running him backwards and forwards about his cell until out of breath… till he was weary of his life and scarce sensible of what he said or did”. Unable to make him confess to witchcraft, Hopkins took Lowes to Framlingham Castle to be ‘swum’ in the moat. It was believed that water would reject a witch as unclean, so they would float. If the victim sank, they were innocent and quite probably dead. How many times Lowes was dunked into the water is not known, but it was this that broke him, and he confessed to having made a pact with the devil, to sinking ships, and to “many other heinous, wicked, and accursed acts, but the help of six imps”. Lowes was one of 18 people who were executed for witchcraft at Bury St. Edmund on the same day.

There is no denying that, generally speaking, far more women than men were accused of witchcraft, but this does not mean that we should overlook the many thousands of men who were also called a witch. What it meant to be a witch is far more complicated than gender alone. Our ancestors lived in a world of superstition and magic, and to them, there was no denying the existence of the male witch.