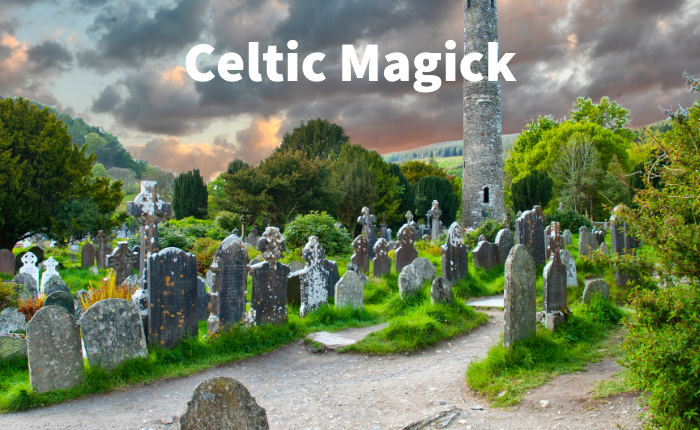 Celtic witchcraft has as its basis a strong sense of spirituality and a love of the earth. Central to this love are the Goddesses and Gids, who play a strong role in Celtic worship. The Celtic religion recognises two main deities; the Earth Mother Goddess and the Horned God. But Celtic Wiccans also worship many othre minor deities who each represent specific qualities important to Celtic individuals. Celtic worshippers celebrate the same Sabbaths, perform rituals and magic, and have a strong faith in their spirituality, just like any member of the Craft. The main differences between Celtic witchcraft and other forms of the Craft is that with Celts, magic is everywhere. Magic is woven into their jewellery, their tattoos and all their artwork and everyday items such as clothing and cutlery.

The Druids are the religious leaders of the Celtic people,the wise and magical priests and priestesses whose special blend of wisdom and magic provided a powerful role model for all the Celtic people. The Druidic priesthood was originally all-female, which male initiates only becoming accepted after many years.

According to Laurie Cabot, Druidesses were divided into three levels, or classes: the highest class were celibate and lived in convents, and were eventually assimilated into Christianity as nuns. The other two levels could be married and lived either with their husbands, or in the temples. With the onset of Christianity these wise women were called witches.

Spirituality is of primary import to Celts, and their devotion to the earth, their goddesses and gods and the effort which they put into their worship is proof of their highly spiritual nature. Although the names of the deities worshiped and the titles of the Sabbats may be different to other Pagan practices, despite the regional dialects which occur in the Celtic rituals, there are strong similarities between Celtic witchcraft and Wicca practiced elsewhere on the globe.

Until fairly recently, in Irish and Scottish Celtic herb lore it was believed that sickness and disease were caused by the fairies. A remedy could only be given by a ‘fairy doctor’, a person gifted with some natural skill in combating fairy magic. The most common herbs used in Celtic fairy medicine were vervain, eyebright and yarrow, over which secret words would be uttered and a ritual performed. A potion made of herbs by a fairy doctor must be paid for in silver. However, a charm is never paid for; a gift may be given instead. Herbs had to be gathered in a special manner, at the correct phase of the moon, while reciting incantations. Herbs found by the side of sacred streams were particularly effective, and used to cure wounds, bruises and so on.

Despite the interest in the Celts, there is a great deal of confusion as to who the Celtic people actually were, and where they came from. DJ Conway in her book Celtic Magic explains that the Celts were not only inhabitants of Wales Ireland and Scotland, as is commonly thought, but resided in much of Western Europe. They were a strongly spiritual, artistic and creative people, with a distinctive artwork, original alphabet (the Ogham) and a deep respect for faeries, elves, pixies and gnomes.

One need not be of Celtic heritage to practice Celtic magic. Each person who is interested in Paganism will follow a basic set of guidelines, but will adapt the rituals and spells to suit her/himself. One aspect which sets Celtic magic apart from others is their respect for the “little people”: faeries, elves and gnomes, whom the Celts called “Good Neighbors” and treated with honor. Much of the Celtic magic calls for the assistance of their Good Neighbors, with those who were familiar often using the little folks’ fairy circles of mushrooms found in fields, rather than casting their own magic circle. However the Celts realized that it is very important to use another’s circle with respect, and with permission, they are aware that you should never encroach upon another’s magic.

The Celts were unique in the level of power they attributed to their female Gods. Warrior  Goddesses were relatively common, and it was  not unusual for Celtic women to fight alongside the male warriors during wartime. Subsequently, women were highly regarded in the Celtic community, with children taking their mother’s name, and daughters inheriting the mother’s property upon her death.

Celtic magic is rooted strongly in the four natural elements: earth, air,fire and water, with many spells and rituals corresponding to at least one of these elements. As in all Wiccan magic, each of the elements is associated with a color, and with certain powers. For the Celts the colors were North, black; South, white; East, red and West, grey. The Celts also placed a great deal of faith in stones and plants and in their ability to heal. Therefore any practitioner of Celtic magic would be well versed in plants and herbal medicine.

Let’s take a look at some of the herbs used by Celts, and what they were used for:

YARROW: A sacred herb and a very potent healer, it intensifies the medicinal action of other herbs taken with it. Helps eliminate toxins (good for colds).It was most useful in its ability to staunch blood flow. Also associated with weather divination.

PLANTAIN: (“slanlus” – herb of health) a very common remedy, used for many ills. Antiseptic; expectorant. If hung around the neck of a child, would prevent abduction by the sidhe.

TANSY: boiled, good for the heart. As a compress for bruises and strains.

CHAMOMILE: (“athair talamh” – father of the ground) One of the finest healing herbs, has been used for centuries. Good for stomach disorders, anti-inflammatory for wounds, sedative for nervous disorders.

DANDELION: (“garbh lus” – rough herb) used for many ills, especially good for the heart, for hypertension, also a good diuretic.

WOOD ANEMONE: (“bainne bo bliatain”) put leaves in a poultice on the head for headaches.

TRAILING PEARLWORT (“mothan”) very effective as a protective herb when carried on the person. When placed below the right knee of a woman in labor, it brought relief. Given to a cow to eat, it protected both the milk and the calf. When placed above the door lintel, prevented the fairy host from ‘spiriting away’ any member of the household. Also used by women as a love charm – pluck nine roots, knot into a ring, and place in the mouth. Then seek a kiss from the man you desire.

PURPLE ORCHIS: A magical plant (“lus an Talaidh” – herb of enticement). Used in love charms. It has two roots, one larger than the other, representing a man and a woman. The plant is to be pulled by the roots before sunrise, facing South. Whichever root is used is to be immediately placed in spring water; if it sinks the person in question will be the future husband or wife. The root can also be ground up and placed under the pillow to bring dreams of your future partner.

ROWAN: Tree of high magic, from which potent charms are procured. Normally planted at the door of the house for protection. Also twigs placed over the byre door. Necklaces of rowan berries with red thread worn for protection by Highland women.

ELDER: Another highly protective tree, beloved of the Sidhe. It is extremely unlucky to cut down or harm an elder (bourtree). The green sap of the bark applied to the eyelids gives the “Second Sight”. Elder is also often planted outside the house for protection. Elder is the medicine chest of the country folk. Elder flower water used for eye and skin complaints, burns, bruises and sprains; as an infusion both flowers and berries are used in cold remedies.

HAZEL: Used in the sacred need fires at Beltaine. Also used in water divination. Hazel nuts associated with wisdom of the Otherworld. Children were given ‘the milk of the nut’ to make them strong.

APPLES: The fruit of life of the Sidhe, and passport to the Otherworld. Apples and hazelnuts used in divination rites at Samhain.

JUNIPER: Berries have protective properties. Burnt by Highlanders in the house and byre at New Year for purification.

IVY: Used for the protection of flocks, of milk and milk products. Ivy, woodbine and rowan woven together in a wreath and placed under the milk vessels. Other “magic hoops” consisted of milkwort, butterwort, dandelion, marigold; or trefoil, vervain, St. John’s wort, dill.