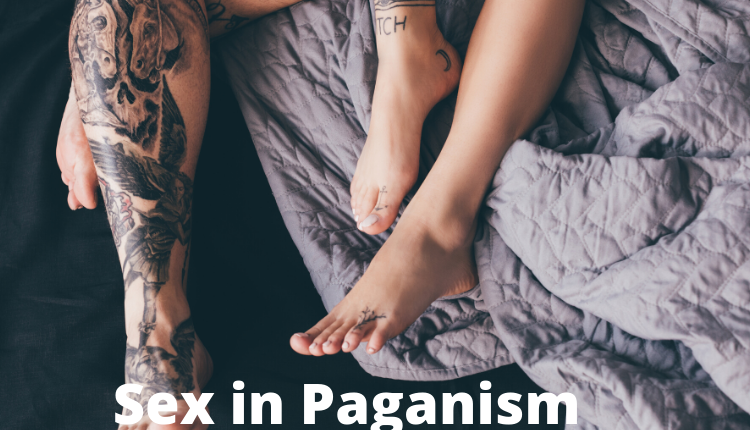 Pagans and Sex in Rituals

Modern paganism is a religious movement that exists outside of the mainstream popular religions. It is not based on liturgy or doctrine and often involves the worship of the natural world, both a god and goddess, pantheons, and/or witchcraft. Some examples of modern pagans are wiccans, druids, shamans, sacred ecologists, odinists and heathens, to name a few. Each has their own belief system and methods of worship. Sometimes, it involves intimate actions.

One common way many pagans worship is through ceremonial rituals. These rituals often include meditation, music, chanting, prayer, dancing, pouring of libations, and the sharing of food and drinks. When most people hear the term “pagan ritual,” their mind becomes flooded with questions and strange visualizations. What exactly goes on during one of those rituals? One common assumption is that there is a whole lot of lovin’ taking place. Well, pagan rituals are, in fact, a reality, but they aren’t exactly what most people may be envisioning. Here is the truth behind pagan “lovemaking” rituals.

Despite what many people may think, pagans usually don’t include intercourse in their rituals. While many groups perform rituals “skyclad” (in the buff), it is done as a symbol of trust and connection, rather than for intimate purposes. However, “ritual intimacy” does, on occasion, take place, and is often referred to as “sex magick.” It is used as a magical tool to symbolize the union of the god and goddess, to raise energy and create magical power. Sometimes ritual acts are only performed symbolically using specific tools and wording. Other times it is, in fact, just what it is.

“The Great Rite” is one of the most commonly performed physical acts in pagan and wiccan rituals. The Great Rite focuses on masculine and feminine energies in relation to the god and goddess. It is usually only used when a coven or spiritual group is in need of some very powerful energy, since the act is seen as one of the most powerful energy forces.

It’s not just done for fun and games, no matter how fun it is. It is the means to an end, not the final goal. The energy is drawn from the connection between the male and the female during the act and used toward willing a specific outcome.

While many people may envision intercourse rituals to be a hot and sweaty free-for-all, the truth is it is usually between one couple that is already in a physical relationship with one another. While this is not a requirement, it is usually the case.

They also often perform the act in private; during a ritual, they will leave the room to do so. Of course, there are always exceptions to this, as there are many pagans who have no problem performing adult magick in front of the rest of the group.

While it may seem really difficult to hold any clear thought during climax, doing so is a major part of reaching your magickal goal during a ritual. Since there is always intent for this kind of magick, it is important to hold on to that intent at the strongest release of energy – the physical pinnacle. If you forget to do so, the energy raised won’t be as focused. This doesn’t mean the climax shouldn’t be enjoyed; it should just be enjoyed with a purpose.

Many Pagans believe that getting it on in a spiritual context can help achieve personal liberation. Common societal emotions often associated with the act, like guilt and shame, are no longer relevant. In order to properly perform this kind of magick, one must reach a state of spiritual, emotional and physical freedom. When entering that “sacred space,” the practitioners are able to experience the primal form of sexual energy, allowing for deep self-exploration and mystical achievements.

Many religions view intercourse simply as an act of procreation, or for something for two married people only to enjoy. Paganism, on the other hand, views sex as an act of joy. It may not be a common act in ritual, but the act is looked at as a natural desire and a gift, and should be enjoyed as such.

A commonly heard line among pagans and wiccans is taken from a poem called “The Charge of the Goddess,” and states “all acts of pleasure are my rituals,” and sex definitely falls into that category. As long as no one is getting hurt or violated, most pagans view all consenting sex – no matter who it is between – as equally acceptable.