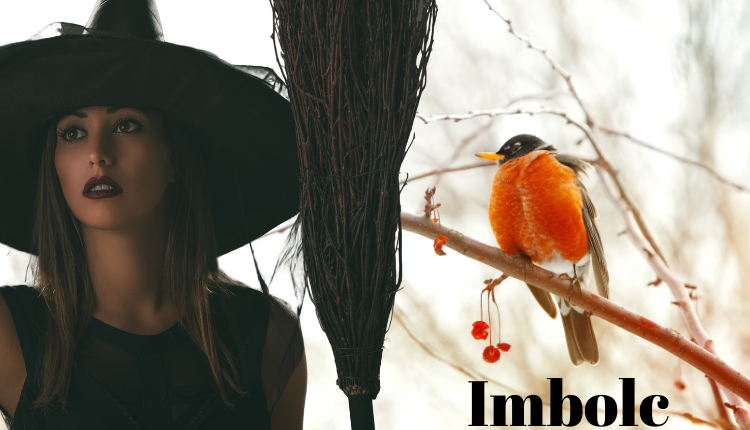 In ancient Celtic cultures, the period between February 1st and 2nd is called Imbolc – the first day of spring, midway through the dark half of the year. It was a time when the stirring of new life manifested itself in the first flow of milk in the udders of pregnant ewes – a sure sign that the lambing season was about to begin. The Church tried to replace Imbolc which was dedicated to the Goddess of Youth and Fertility – Bride. Thus, in the 5th century, February 1st became St. Brighid’s Day and February 2nd became Candlemas.

Imbolc reminds us that spring is coming soon, and that we only have a few more weeks of winter left, as the Wheel of the Year continues its turn.  We may see the first signs such as daffodils pushing their green leaves through stubborn snow, or perhaps an early crocus in its purple splendor. The sun gets a little brighter, the earth gets a little warmer, and we know that life is quickening within the soil.

Imbolc falls on February 1st and 2nd in the Northern Hemisphere and it marks the center point for the dark half of the year. This is the time of year when the lambs give birth and the earliest of flowers reach upwards towards the sun.  As a whole, this Sabbat represents ideas like growth, renewal, and purity.  This is a time to appreciate the budding fertility of the earth and it is also a time to purify both our spaces and our minds.

Historically, Imbolc was widely observed in Ireland, Scotland, and the Isle of Man. Imbolc was defined as “in the belly” and refers to pregnant ewes — who symbolized the beginning of a new life.

In the festival, pagans worshiped Brighid and asked for her blessing to show them a path of purity, strength and a feeling of satiation. During the celebration, people would hold torches, keep candles in every corner of their houses, the brightness symbolizing the positivity that would accompany the changing season. Cakes would be made, and a feast would be organized to celebrate.

Traditional foods included those prepared with seeds, raisins, pork, poultry, or lamb, with sides of potatoes, cabbage, onions, and garlic. Seeds represented growth and raisins symbolized a fruit of the sun god.

Observers would remove the greens from Yuletide — a festival observed by the historical Germanic people — and set them on fire to mark the end of the winter. The greens were symbol of hope and life that existed beyond winters. Its color kept people positive and made them believe that greenery would cover the land soon.

Believers would make Brighid’s crosses, and a doll called Brídeóg depicting the goddess. The doll would be carried from one house to another to distribute the goddess’ blessings. To seek the blessings, people would make a bed for Brighid, offer her food and drink, and leave their clothes outside. Initially, the ritual was associated with some essential events mentioned in Irish mythology.

Brigid was favored among the Celts.

She is the greatest of the Celtic divinities and is closely associated with the land. She is the protector of the wells and springs. She is the guardian of nature, and therefore agriculture. She is specifically associated with livestock. As a fertility goddess, Brigid is also the patron of the poets, artists, and others who create. Hence, her name is invoked at childbirth.

When Brigid slipped into the world, a tower of flame rose from the top of her head to the heavens. Her fire aspect means she is the goddess of the hearth and the forge. She is the guardian of those who worked with metal.

Brigid is said to have invented the fervent Irish mourning wail called keening. Part of her presence resides in the faerie spirit whose keening can be heard at night in times of grief. This link reminds us to respect our losses. Experiences of renewal often include bereavement. We continually suffer losses, especially in the moments of passage. Claiming our wholeness includes valuing the sorrow for that which is no more.

One traditional practice on her day was to put baked goods out on the doorstep. They were called cakes for the queen of heaven. These offerings were often eaten by hungry travelers in her name. We might honor this custom by giving money to the homeless for something to eat on Imbolc. The idea is to find a way to share the boon. Those who have been blessed in life are called upon to develop some practice of service to others.

If you want to learn how to make a Celtic Brigid Cross, check out this video:

You can also make the traditional Brídeóg, or corn doll, mentioned in this article: