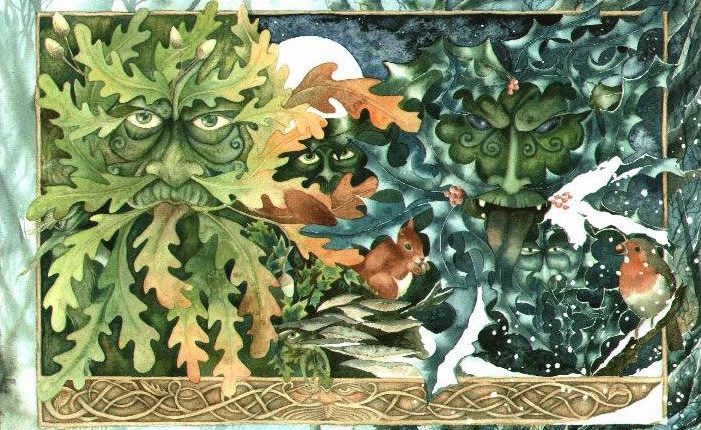 The Celts had a very iconic midwinter, God.

The Holly King was one of the sacrificial gods of the ancient Celtic cultures. Representing the dark half of the year, the Holly King was defeated at the winter solstice (Yule) by his twin, the Oak King. Both are aspects of the Horned God.

Sprigs from Christmas holly trees were worn in the hair during the mistletoe rituals performed by the priests of the Celts, the Druids, at the summer and winter solstice observances. The pointy leaves of holly trees were thought to afford magical protection against evil spirits. Holly tree sprigs were also brought into their dwellings during the cold-weather months in the belief that they afforded shelter to the fairies, those tiny spirits of the forest.

Presents are given to children or young families to represent abundance and fertility. This is the time of the rebirth of the Sun. To honor that rebirth,  and to give wishes or hopes to the person receiving the gift for abundance and fertility in the coming year. Now don’t assume that ‘fertility’ means giving birth to a child. Remember these people had to live off the earth and the crops they grew. They didn’t have grocery stores on the corner to trot down to and buy food for their families. So in most cases the fertility was for the coming growing season.