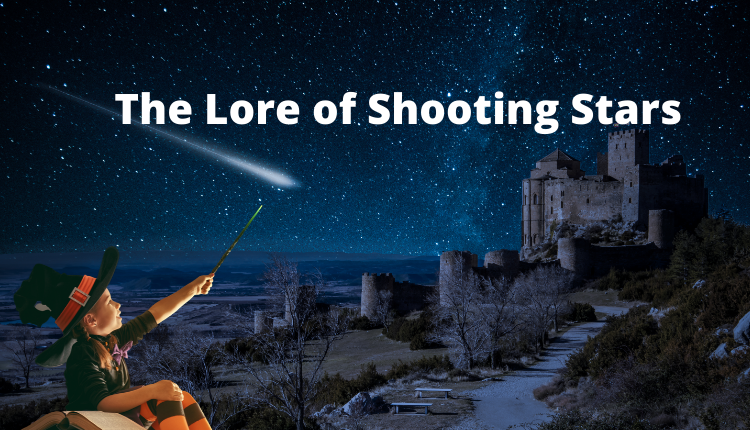 The worldwide lore of the shooting star

Some scholars speculate, based on common legends between various cultures around the globe, that the old practice of “wishing upon a shooting star” originates from a time when people believed that the gods would occasionally open the dome of heaven to peek in on what the mortals were doing on Earth. This opening of the dome released a star, and if one made a wish while there was still light, and before the dome slammed shut, the gods might hear and grant the wish.

In Switzerland, it was thought that shooting stars possessed the power of God and could ward off pestilence.

The Swabians believed a shooting star foretold a year of good luck.

In Chile, a shooting star is also an omen of good luck, but one must quickly pick up a stone to guarantee the luck.

In the Philipines, one must tie a knot in a handkerchief before the light is extinguished to capture the good luck of a shooting star.

Some people of Hawaiian or Japanese descent believe if you see a shooting star coming in your direction, you must open the collars/breast of your kimono to admit the good luck.

Also in Swabia, a person seeing 3 shooting stars in one night was doomed to die.

In Lithuanian folklore, it’s believed that a spinner spins a thread for each new life and attaches it to a star. At the moment of a person’s death, the thread breaks and the star falls to Earth.

The Seneca believed that pointing to a shooting star would reveal one’s location to the star, with ill effect.

Some Hispanic cultures believe that one must utter “God guide it” upon seeing a shooting star to avoid bad luck.

The Baronga culture would spit on the ground upon seeing a shooting star and cry out “go away, go away, all by yourself” to avoid bad luck.

In some parts of the Catholic deep south US, it is believed that shooting stars are souls leaving purgatory for heaven.

In Catholic Germany, it was believed that a shooting star was a suffering soul seeking prayers from those who observed it. If one recited “rest in peace” three times before the light extinguished, then the soul would be delivered from purgatory.

In some Philippine cultures, it is believed that shooting stars are the souls of drunkards that return to Earth at night to sing “do not drink, do not drink“. Each day they attempt to climb back up to heaven, but fall down each time.

Some Muslims believe shooting stars are fireballs thrown down on devils by vengeful angels.

Some old Russian cultures believe shooting stars are demons who were transformed and chased out of heaven.

In Austria, upon seeing a shooting star near one’s house, the children were brought inside and sprinkled with holy water.

It was thought in some Germanic cultures, that shooting stars were fire-breathing dragons, if you insulted or cursed one of them, they would rain stinking cheese and rubbish down upon Earth. Some believed in influencing the dragon with an offering, whereupon the passing dragon would leave a gift of ham or bacon. The fire dragon also carried money which it would sometimes drop, making people rich.

In Polish folklore, it’s thought that a falling star would drop one of three things – a treasure, a gelatinous mass, or cow dung!