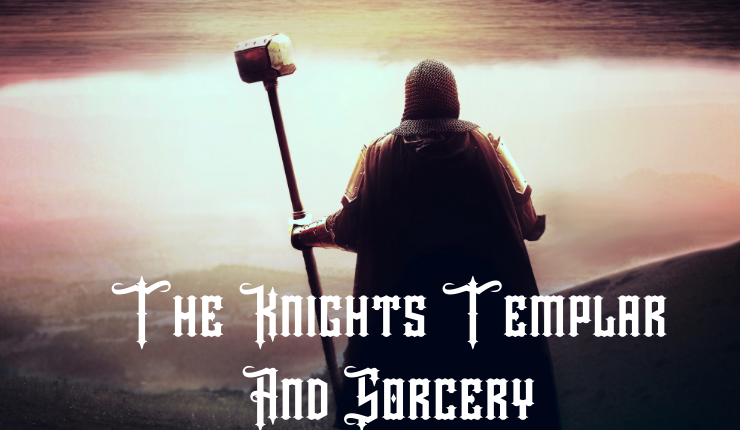 How the Knights Templar Became Sorcerers

Philip IV of France (1268-1314 A.D.), was often referred to as Philip the Fair, which had very little to do with any inclination towards justice and equity, rather his stunning good looks by the standards of the High Middle Ages.  In fact, his reign was largely characterized by an impressive litany of double-crosses, attempts to consolidate the absolute power of the monarchy, starting a fight with Pope Boniface VIII, angling to put his relatives on a variety of foreign thrones, expelling the Jews, and annihilating the Knights Templar.  A 13th Century monarch being a decidedly untrustworthy and unpleasant shit is not especially remarkable.  Now, kings get the lion’s share of air time in history, because, well, they were kings and people want to write about celebrities, rather than the bureaucrats who do the grunt work.  Poke around a little bit, and you inevitably find a lower profile government advisor who was especially reliable at actualizing the nastier ideas of his king (George Bush had his Cheney, the Medicis had Machiavelli).  Kings love these guys.  Everybody else hates them.  Philip IV had Enguerrand de Marigny, who came up with a brilliant stratagem for getting rid of the pesky Knights Templar at Philip’s behest, a legal attack so successful that when Philip died, Marigny’s opponents were all too happy to use the same tactic on him.

All sorts of things have been attributed to the Knights Templar (or their official name “The Poor Fellow-Soldiers of Christ and of the Temple of Solomon”), curious considering they only had about two centuries of prominence, mostly revolving around the Crusades.  They were pretty much the Roman Catholic Church’s Special Forces in the Holy Land, which made them a fairly popular charity throughout Christendom.  Military prowess aside, they pretty much invented a forerunner of modern banking, and it was their financial acumen that would eventually get them into trouble.  More specifically, when you loan money to an absolute ruler and he doesn’t feel like paying you back, homicidal shenanigans typically ensue.  If we know anything about aristocrats, it’s that they are not especially fond of getting their hands dirty.  That’s what minions are for.  And Philip IV of France was no exception.

When Philip IV ascended the French throne in 1285 he inherited a lot of debt from his father’s war against Aragon, which he compounded with his incessant wars against the English and their allies in Flanders.  And since the concept of “too big to fail” had not yet been invented, he had to settle his accounts with extreme prejudice.  In 1306, he expelled the Jews from France, mostly so he could seize their assets and clear his debts.  This was not enough, so he also went after Lombard merchants who had made him extensive loans.  He then debased French coinage, cutting its value by two-thirds, and tried to tax the French clergy.  This was not enough.  He still owed an enormous amount of money to the Knights Templar.  By the end of the 13th Century, the Holy Land had been lost, and the Knights Templar had metamorphosized from a monastic military order into a European financial powerhouse, focused on banking and commercial activities.  In short, they had cash, and Philip wanted it.  Since he’d already pissed off the Pope by taxing Roman Catholic priests for half their annual salary in France, and the popularity of the Templars was waning, Philip set his trusted councilor Enguerrand de Marigny to the task of liberating the assets of the Knights Templar in service of the French throne.

Enguerrand de Marigny was born at Lyons-la-Forêt in Normandy to a family with a minor Baronage, and spent most of his life as a civil servant, eventually rising to the position of chamberlain and secretary to Philip IV.  He was considered the consummate behind-the-scenes political operator.  When it came time to put the hurt on the Templars, Philip turned to Marigny.  Marigny was aware that the Templars had some freaky initiation rites and slightly unorthodox theologies, so he figured that would be a nice way to destroy them without raising too many eyebrows at the Vatican.  The Templars were all arrested, and prosecution commenced.

The prosecution was directed by his ministers, Nogaret and Enguerrand de Marigny. The templars asserted their innocence and demanded a fair trial, but they found few advocates who would undertake their defense, and they were subjected to hardships and tortures which forced many of them into confessions dictated to them by their persecutors. During this interval, the pope’s orders were carried into other countries, ordering the arrest of the Templars, and the seizure of their goods, and everywhere the same charges were brought against them, and the same means adopted to procure their condemnation, although they were not everywhere subjected to the same severity as in France.

At length, in the spring of 1316, the grand process was opened in Paris, and an immense number of templars, brought from all parts of the kingdom, underwent a public examination. A long act of accusation was read, some of the heads of which were, that the Templars, at their reception into the order, denied Christ, and sometimes they denied expressly all the saints, declaring that he was not God truly, but a false prophet, a man who had been punished for his crimes; that they had no hope of salvation through him; that they always, at their initiation into the order, spit upon the cross, and trod it under foot; that they did this especially on Good Friday; that they worshipped a certain cat, which sometimes appeared to them in their congregation; that they did not believe in any of the sacraments of the church; that they took secret oaths which they were bound not to reveal; that the brother who officiated at the reception of a new brother kissed the naked body of the latter, often in a very unbecoming manner; that each different province of the order had its idol, which was a head, having sometimes three faces, and at others only one; or sometimes a human skull ; these idols they worshipped in their chapters and congregations, believing that they had the power of making them rich, and of causing the trees to flourish, and the earth to become fruitful; that they girt themselves with cords, with which these idols had been superstitiously touched (Wright, 1851, p55-56).

The rest, of course, is history.  The Templars were accused of sorcery, burnt at the stake en masse, their assets seized, and they faded into the source of countless conspiracy theories ever after.  Quite the feather in the cap for Enguerrand de Marigny.  Or rather, the pot calling the kettle black.  At first, the future looked bright for Marigny, as he even managed to weather accusations of bribe-taking leveled by the King’s brother Charles de Valois.  Unfortunately, karma is a bitch.  Philip IV died in 1314.  Louis X ascended the throne.  Charles de Valois, who had opposed a lot of Philip’s financial hijinks again went after Enguerrand de Marigny, denouncing him to Louis X, but while Marigny may have been a crooked accountant, he knew how to keep two ledgers, thus nothing out of order emerged, and Louis was inclined to simply banish him to Cyprus.  Charles then took a page out of Marigny’s own book and accused him of sorcery.

When, after the death of Philippe le Bel, Charles of Valois was resolutely bent on the destruction of Enguerrand de Marigny, and the long proceedings which he instituted threatened to prove fruitless, it was opportunely discovered that Enguerrand had instigated his wife and sister to employ a man and woman to make certain waxen images which should cause Charles, the young King Louis Hutin, the Count of Saint-Pol, and other personages to wither and die. As soon as Charles reported this to Louis, the king withdrew his protection and the end was speedy. April 26, 1315, Enguerrand was brought before a selected council of nobles at Vincennes and was condemned to be hanged, a sentence which was carried out on the 30th; the sorcerer was hanged with him and the sorceress was burned, the images being exhibited to the people from the gallows at Montfaucon, which Enguerrand himself had built, while the Dame de Marigny and her sister, the Dame de Chantelou, were condemned to imprisonment. Thus Enguerrand perished by the methods which he and his brother, the Archbishop of Sens, had used against the Templars, and the further moral of the story is seen in the remorse of Charles of Valois, ten years later, when he lay on his death-bed and sent almoners through the streets of Paris to distribute money among the poor, crying, “Pray for the soul of Messire Enguerrand de Marigny, and of Messire Charles de Valois!” (Lea, 1888, p451).

Of course, Marigny was languishing in prison on the relatively thin bribery charges Charles de Valois had brought against him, but this was of little import to the accusation, since an intricate plot was enumerated, and as the author of many of Philip IV’s nastier plots, few would disbelieve he had the savvy to undertake the sorcerous murder of his principal accusers, Charles de Valois and St. Pol.

It was stated that Enguerrand had sent for his wife, the lady of Marigny, her sister the lady of Chantelou, and his brother, the archbishop of Sens, who came to him in his prison, and there held counsel together on the best method of effecting the deaths of the two counts. The ladies, after leaving the prison, sent for a lame woman, who appears to have dealt in alchemy—qui fesoit l’or—and a mauvais garcon, named Paviot, and promised then a great sum of money if they would make “certain faces whereby they might kill the said counts.” The “faces,” or images, were accordingly made of wax and baptized in the devil’s name, and so ordered “by art magic,” that as they dried up the counts would have gradually pined away and died. But accidentally, as we are told, the whole matter came to the ears of the count of Valois, who gave information to the king, and the latter then consented to Enguerrand’s death (Roback, 1854, p219).

Dead Templars were undoubtedly having a good chuckle from their graves over this turn of events.  It, of course, did not make them any less dead, but at least suggests that what goes around, comes around.  It wasn’t until the 15th Century that witch-hunting really started to come into its own as a professional calling, but the 13th Century did see the rise of the Inquisition (mostly as a means for dealing with the proliferation of heretical Christian sects), and some Inquisition apologists have suggested that the whole notion of a body of jurisprudence, regardless of how wacky and torture-based, was largely in response to what the Church saw as a flourishing traffic in politically motivated accusations of sorcery and necromancy.  Through much of his life, Enguerrand de Marigny was an undoubted success, but unfortunately, success breeds contempt and the hatred of those you have bullied on your way to the top.  And maybe, just maybe, sometimes you have to resort to a little sorcery to get yourself out of the inevitable jam