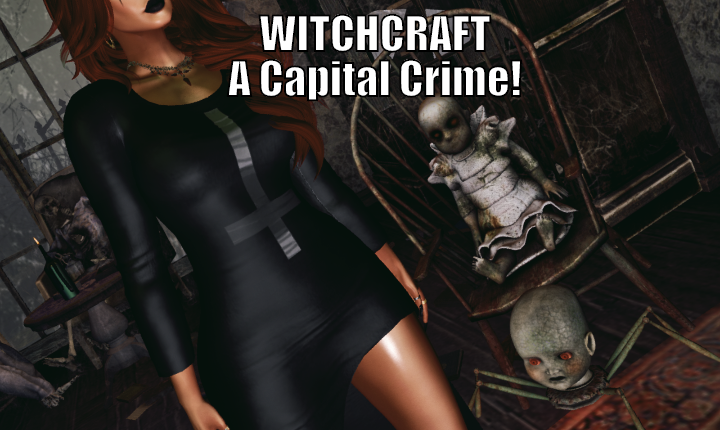 MURDER may be the surest ticket to the death chamber in Connecticut, but 350 years ago, witchcraft was the crime most likely to result in a death sentence. From 1647, when Alice Young of Windsor was hung for witchcraft, to 1663, when the state’s taste for executing suspected witches began to wane, Connecticut convicted and executed more witches than anywhere else in colonial America. At least seven suspected witches were executed in that period.

Few records were kept on the witch trials, and much of the information about them comes from journals. Connecticut made witchcraft a capital offense as far back as 1642, but it is unclear whether any executions occurred before 1647. Young’s death, for instance, is mentioned in two journals from the time, but each offers only a one-line entry about her hanging. Later trials offer somewhat more information about the other victims

Mary Johnson, a servant from Wethersfield, confessed to being a witch in 1648 and was executed. A jury indicted her for “familiarity with the devil,” and the famous minister Cotton Mather wrote about her trial. He wrote that Johnson had essentially summoned the devil through her own “discontent” and the devil had done various chores for her. Young, who had been accused of stealing in 1646, had also confessed to other crimes.

“She confessed that she was guilty of the murder of a child, and that she had been guilty of uncleanness with men and devils,” Mather wrote.

Often, more familiar crimes such as infanticide and theft were associated with witchcraft, according to “The Devil in the Shape of a Woman,” a book on witchcraft by Carol F. Karlsen. At other times, witch trials were held after the unexplained sickness or death of people or animals. Witches were sometimes the village healers and would attract the community’s ire when their patients fell ill, said Dr. Walter Woodward, the Connecticut state historian and an assistant professor at the University of Connecticut. The motivations for executing suspected witches were complex, according to people who have studied witchcraft.

“One of the hardest things for people in the 21st century to understand,” Dr. Woodward said, “is why seemingly rational people could be so afraid of witches that they could kill people.”

To some degree, it was a way for people to explain the unexplainable in their lives, he said.

“Religion and magic and reality were all mixed together,” he said

Witches were thought to have superhuman powers to harm other people or lure them into a compact with the devil. They were generally charged with giving themselves to the devil or losing their fear of God. Sometimes, a witch would be identified through “witch marks” seen on her body. Other times, the accusers would try to force a confession or present witnesses to testify against the accused. Torture was sometimes used to get a confession, Ms. Karlsen wrote. Internal dissension or disputes between neighbors could provoke accusations of witchcraft; in some instances, accused witches would fight back, suing for defamation.

It wasn’t only women who were accused of witchcraft. At times, their husbands would be charged along with them, sometimes accused by their own wives.

Witch-hunting reached its peak in Connecticut in 1662, when the Hartford witch hunt began, eventually resulting in accusations against at least eight people, at least three of whom were executed. It was touched off by a woman named Ann Cole, who began having “fits” in which she shook and spoke of the devil, according to an account by a Hartford minister included in the book “Witch-Hunting in Seventeenth-Century New England.” Two of the people she spoke of during her fits were given the “swimming test,” in which a suspected witch would be tied and thrown into the water. If they floated, they were considered to be witches; if they sunk, they were innocent. Those who floated, Dr. Woodward said, were considered to have rejected their baptism.

Even then, however, people were skeptical about these sorts of tests. The witness who wrote about it said he was concerned it was simply “superstitious and magical,” and the man and woman who were subjected to the test in Hartford were set free despite having bobbed up “after the manner of a buoy.”

The Hartford outbreak would be the last sensational and deadly witch hunt in the state. By the mid-1660’s, Gov. John Winthrop Jr., began to express concern about executing witches, and public sentiment eventually turned against the practice. By the time the famous Salem witch hunt began in Massachusetts in 1692, Connecticut officials had distanced the state from the practice. When the laws were rewritten in 1750, witchcraft was no longer on the list of capital crimes.