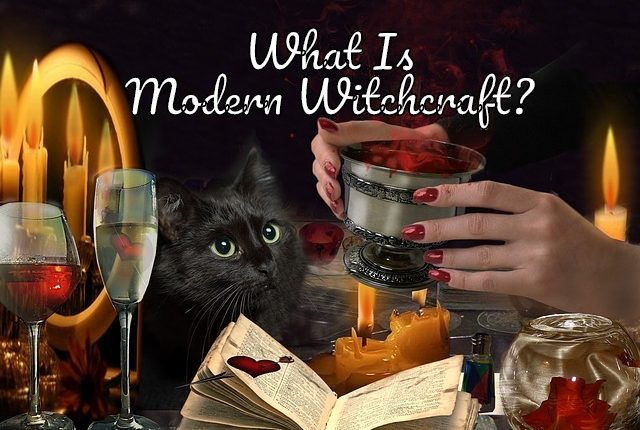 What is “Modern Witchcraft”?

For centuries, the practice of witchcraft was considered an evil and foul tradition, and witches were hunted and killed, often by cruel and painful methods, usually by being burnt alive at the stake. Fear of witches and witchcraft was widespread throughout several areas of Europe and in some areas of a newly settled America. The witchcraft delusion was an epidemic affecting everyone, and even a simple accusation of being a witch, despite the absence of any real evidence, was often enough to condemn an individual to torture and death.

Thankfully, modern society has moved beyond such superstition and insanity, and today, witches are free to practice varying traditions of witchcraft openly and without fear of persecution. The Wiccan religion is perhaps the most well known form of modern witchcraft, thanks in part to movies and media attention. However, there are several forms of modern witchcraft being practiced today, though most have roots in ancient cultural traditions.

Modern witchcraft in western culture can be largely attributed to the influence and practices of three specific individuals. The first is Gerald Gardner, sometimes referred to as the Father of modern Witchcraft. In the late 1930s and during the 1940s, Gerald Gardner began establishing several covens throughout Britain in an attempt to revive the foundations of the old religion, which is closely related to modern Wicca.

Gerald Gardner was a public figure who wrote several books on the subject of witchcraft, helping to cast the old traditions in a new and positive light and reshape society’s perspective of witchcraft.

Another individual of note is Margaret Murray, a British scholar who studied ancient witchcraft and also wrote of old religions, preceding Gerald Gardner’s work by over 20 years. Her books are considered essential reference sources for practitioners of modern Wiccanism.

The third individual credited with influencing the contemporary witchcraft movement is Alexander Sanders. Alexander studied witchcraft as a young boy, as it was a family tradition passed down by his grandmother. Alexander also established several covens throughout Britain, and proclaimed himself the “king of witches.”

While Wiccanism might be the most popular tradition of witchcraft studied and followed by modern society, other old traditions still exist. Native Americans and indigenous tribes located in Central and South America still practice shamanistic magic. Similarly, tribes in Africa and Australia look to their tribal witch doctors whenever tribal magic might be needed, whether it be asking the gods for a good hunt, or seeking to expel a sickness from a tribe member.

In Louisiana and Haiti, Voodoo is practiced, and similar traditions such as Santeria in the Spanish Islands, as well as other offshoots of voodoo such as Hoodoo and Macumba.

Most forms of witchcraft share common denominators — rituals, spellcasting, and calling upon the gods for help or wisdom. Typically, most forms of witchcraft are also considered “white”, or good, and are meant for healing and positive effects, rather than to induce harm, curses, or ill will towards an individual.

While many books and resources are available for those interested in Wicca and other forms of witchcraft, individuals should also take care not to treat witchcraft lightly or as a form of entertainment. Spells and rituals are best left to professional witches who have several years of experience and have studied extensively.

Considered a Gythia (Asatru High Priestess) among her Coven, Julia Roslyn Antle is a master of divination and dream interpretation. Her wisdom is sought-after by her peers, her colleagues as well as the public. http://www.7witchescoven.com