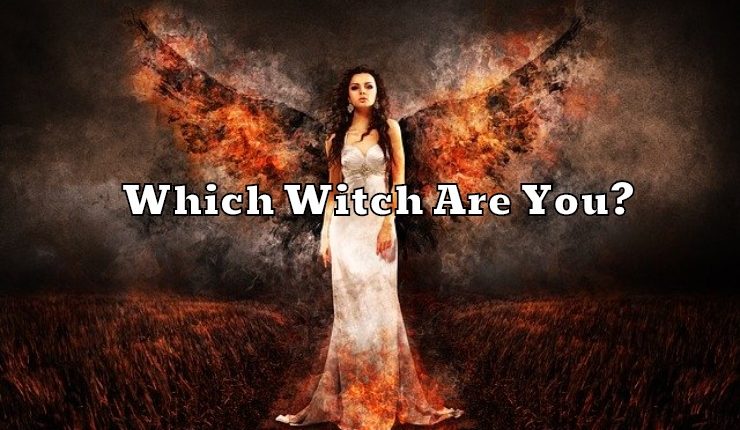 Which Witch Are You? A look at some witch types

2. Gardnerian Witch
Gardnerian Wicca is a practice of Wicca that came about in the 1950s and because of Gerald Gardner, often considered to be “The Father of Wicca”, spread across the world. Those who practice Gardnerian Wicca have strong ties to nature, challenge societal norms, and have many rituals that are the foundation of their practice. In order to be a Gardnerian witch you must be initiated, members cannot initiate themselves. There is also an incredibly structured system of advancing as a witch and with your practice as you grow and learn more about your craft.

3. Alexandrian Witch
Founded in the 60s by Alex and Maxine Sanders, Alexandrian Wicca is a British derivative of Wicca and witchcraft. Alexandrian Wicca has a lot of similarities to its sister Gardnerian Wicca, but also pulls elements of ceremonial magick and Qabalah as well. Alexandrian Wicca is seen as “more eclectic” and is less structured than Gardnerian Wicca. They follow the belief of “if it works, use it.” Witches still must be initiated in order to practice, and there are degrees and levels of advancement that can be achieved as a witch moves along in their practice. Their covens meet on new moons, full moons and during Sabbat festivals

4. Correllian Witch
Correllian-Nativist Tradition, or Correllian Wicca, was founded in the late 20th century by Caroline High Correll. She claimed to come from a line of hereditary witches, and was a psychic, spiritual healer, and herbalist. Heavily influenced by her supposed lineage and Aradian witchcraft, she was head of the church until her death in the 1940s. Correllian Wicca was not recognized as Wicca until the 1990s, and was seen more as eclecticism and universalism. Correllian Wicca is one of the most widespread practices still in existence today.

5. Sea Witch
A sea witch has strong ties to water and the ocean and uses that element often in her practice. Sea and ocean magick will often use sand, shells, driftwood, or other elements that come from that place. Sea witches feel connected to water and anciet folklore involving sirens etc.

6. Kitchen Witch
Also known sometimes as a hearth witch or a home witch, kitchen witches create most of their magick in the home or in the kitchen. They are very home-based, often incredibly nurturing, and love to make their home a truly special and sacred space. Kitchen witches love to cook and brew and use herbs, sometimes gathered from their own garden. When practicing they combine their own personal and individual magical energy with essential oils, herbs, food, and everyday objects to create their spells, rituals, and magick.

7. Hedge Witch
Hedge witches practice what’s known as “hedge jumping” which is venturing out of this world and into the Otherworld. Hedge witches can communicate with the spiritual world and can send messages between both worlds. Hedge witches practice astral projection as well as work with herbs and Earth based magick. But what makes them specifically a hedge witch is their ability to cross the “hedge” aka: the boundary between this world and the spirit world. It’s thought that the “flying on a broomstick” legend was a misunderstanding based on hedge witches “flying” into the siritual realm.

8. Dianic Witch
Dianic witches practice the most feminist of all witchcraft practices. Followers of the Cult of Diana are all women, so no men allowed. Dianic witches worship the Goddess through all three of her aspects—Maiden, Mother, and Crone. Rituals and worship can vary, but all have feminist aspects and come from a feminist standpoint.

11. Green Witch
Also called garden witches or forest witches, green witches are highly connected to the earth the energy that it possesses. They may have their own garden where they grow their own herbs, but they also study their area and practice with local plants and their own environment. Green witches use plants/greenery in their spells and magic and sometimes, even their cooking and in their home. Green witches are often very natural and love to be in nature and near anything “green”—plants, trees, flowers, etc. They do this to be as close to Mother Earth, and the spirit she encompasses, as possible.

13. Cosmic Witch
Cosmic witches are contemporary witches who look to the cosmos, astrology, and astronomy and work those elements and celestial energy into their practice. Also called “Star Witches”, these witches often follow the planets and the alignment of the stars and base their spells and rituals on the different placements.

14. Secular Witch
Secular witches still cast spells, use crystals, herbs, oils, and candles, but they don’t attach spirituality to their practice. Secular witches don’t worship a deity or higher being—their practice is entirely non-religious. They don’t believe in the power behind energy or that there is energy in their work. This isn’t to say that a secular witch CAN’T be spiritual, it’s simply that their work is not. The two are entirely separate.

15. Solitary Witch
A solitary witch can be any type of witch, but they choose to practice alone rather than with a coven. This could be by choice or because they haven’t found a group to work with yet. There are also legends that solitary witches are reincarnations of witches who have been practicing for generations and at puberty, their knowledge is awakened. Since they already remember and understand the craft, their need for a coven is less than a newer witch.

16. Eclectic Witch
An eclectic witch does not have one set religion, practice, tradition, or culture that they pull from. Their practice derives from many sources and, ultimately, becomes the witch’s own. They may worship a higher being, or their practice may be primarily secular, or it might be its own kind of spiritual. An eclectic witch ultimately makes their own “rules” with their practice—it is entirely unique based on the individual witch.