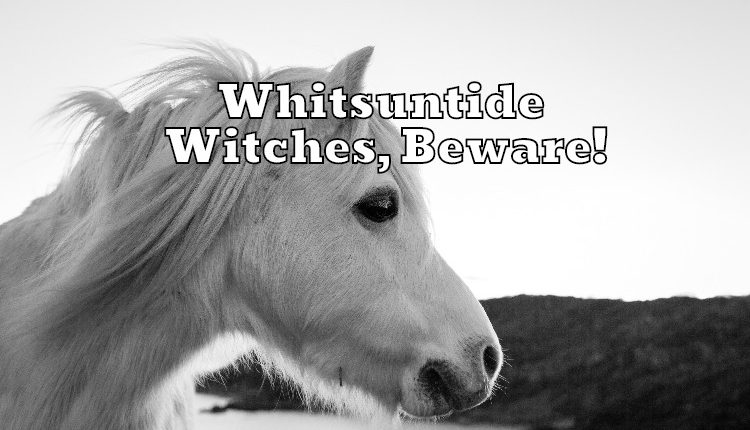 Whitsuntide is a very fatal and unlucky time. Especially beware of water then, for there is an evil spirit in it, and no one should venture to bathe, nor to sail in a boat for fear of being drowned; nor to go a journey where water has to be crossed.

The following tale illustrates how witches of old looked at Whitsuntide:

There was a widow woman with one son, who had a nice farm of her own close to a lake, and she took great pains in the cultivation of the land, and her corn was the best in the whole country. But when nearly ripe, and just fit for cutting, she found to her dismay that every night it was trampled down and cruelly damaged; yet no one could tell by what means it was done.

So she set her son to watch. And at midnight he heard a great noise and a rushing of waves on the beach, and up out of the lake came a great troop of horses, who began to graze the corn and trample it down madly with their hoofs. When he told all this to his mother she bade him watch the next night also, but to take several of the men with him furnished with bridles, and when the horses rose from the lake they were to fling the bridles over as many as they could catch.

Now at midnight there was the same noise heard again, and the rush of the waves, and in an instant all the field was filled with the fairy horses, grazing the corn and trampling it down. The men pursued them, but only succeeded in capturing one, and he was the noblest of the lot.

The rest all plunged back into the lake. However, the men brought home the captured horse to the widow, and he was put in the stable and grew big and strong, and never another horse came up out of the lake, nor was the corn touched after that night of his capture. But when a year had passed by the widow said it was a shame to keep so fine a horse idle, and she bade the young man, her son, take him out to the hunt that was held that day by all the great gentry of the country, for it was Whitsuntide.

And, in truth, the horse carried him splendidly at the hunt, and every one admired both the fine young rider and his steed. But as he was returning home, when they came within sight of the lake from which the fairy steed had risen, he began to plunge violently, and finally threw his rider. And the young man’s foot being unfortunately caught in the stirrup, he was dragged along till he was torn limb from limb, while the horse still continued galloping on madly to the water, leaving some fragment of the unhappy lad after him on the road, till they reached the margin of the lake, when the horse shook off the last limb of the dead youth from him, and plunging into the waves disappeared from sight.

The people reverently gathered up the remains of the dead, and erected a monument of stones over the lad in a field by the edge of the lake; and every one that passes by still lays a stone and says a prayer that the spirit of the dead may rest in peace.

The phantom horses were never seen again, but the lake has an evil reputation even to this day among the people; and no one would venture a boat on it after sundown at Whitsuntide, or during the time of the ripening of the corn, or when the harvest is ready for the sickle, for strange sounds are heard at night, like the wild galloping of a horse across the meadow, along with the cries as of a man in his death agony.