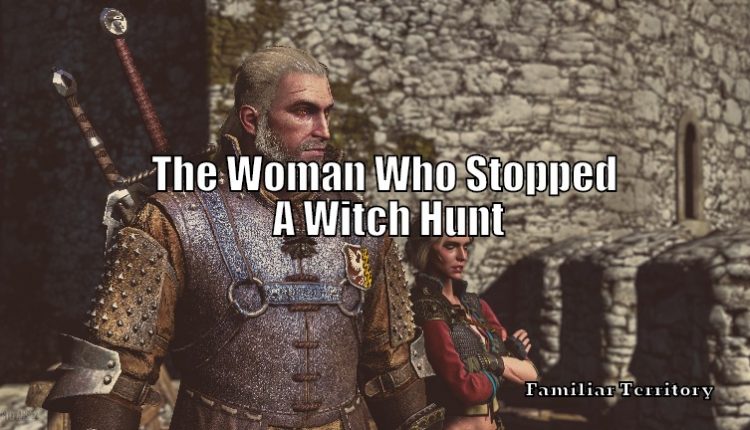 The Scottish Woman Who Stopped A Witch Hunt

Would you have stood up to a witch-hunt? In 1597, a Glasgow woman called Marion Walker did.

Marion Walker used the methods of the modern-day whistleblower. She obtained, copied and leaked writings. She wanted the guilty held to account for the horrors of the Glasgow witch-hunt, a sensational miscarriage of justice even by the standards of the day.

We know more about her thanks to Dr. Daniel MacLeod of the University of Manitoba. He came across Marion as he investigated the networks of resistance of the city’s Catholics.

“She’s a widow, she’s not wealthy but she’s got an ability to be heard.”

Marion was not frightened to take on any foolhardy minister who dared to upbraid her.
Her Glasgow wasn’t like Glasgow today. For one thing, says Dr. MacLeod, it was tiny, “maybe even half the size of modern-day Fort William”.

Yet it became the stage for one of the worst excesses of the Scottish witch-hunt.
Innocent people were being falsely accused by an utterly bogus witch-finder and put to death.

The witch-finder was also a woman – the so-called “Great Witch of Balwearie”, Margaret Aitken.

She’d been arrested for witchcraft in Fife and tried to save her skin by claiming she could identify other witches just by looking in their eyes.

The government, including King James VI, saw her as a brand-new super-weapon in the war on Satan, and soon terrified Glaswegians were being led out in front of this desperate individual. People were being strangled and burned at the stake because of her evidence.

Then as the witch-hunt went on, someone had a bright idea. Take the people Margaret condemned one day and bring them back the next in different clothes and a different order. The great witch turned witch-finder failed to recognize them, condemning and exonerating a different selection.

It dawned on the ministers and magistrates that what they really had was a horrifying fraud. They’d killed people for nothing. They ran for cover.

And this is where Marion stepped up. She wasn’t going to let the ministers get away with this, particularly not John Cowper, the Great Witch’s most zealous promoter. Cowper was a thin-skinned vengeful individual.

“He was not very popular,” says Dr. MacLeod. “But I think he did a lot of it to himself.”

Marion wanted to take him down. Through her networks of resistance, she managed to get her hands on the most incriminating document of all, the final confession of the Great Witch herself where she pointed her finger at Cowper and blamed him for all that he had done. The church wanted to hush it up – so Marion circulated it.

Cowper was livid. Thanks to Marion, the confession was passing hand-to-hand, making sure Glaswegians knew exactly who to blame for the deaths of their innocent friends and relatives. To strike back at her, he mobilized his fellow ministers to back him up.

According to Dr. MacLeod: “The presbytery passed this act threatening the branks for any who blamed the ministry of the city for putting to death the persons lately executed for witchcraft.”
The branks were literally a gag – the scold’s bridle – with a metal cage for the head and often with a prong to stop the mouth. But in the end, they backed off. They didn’t dare gag Marion.

“It would go on almost a cycle,” said Dr. MacLeod. “Marion would ‘slander’ Cowper, he would call her before the presbytery and it would go on like that, but the root of it was this confession and her role in passing it around.”

But wasn’t Marion putting herself in peril of being prosecuted as a witch?

Dr. MacLeod thinks people were a bit more sophisticated than that.

“They knew she wasn’t a witch but a defender of wrongfully-accused women,” he said.

Marion lived to fight another day against the Protestant ministry. She became a conspicuous supporter of the Jesuit, John Ogilvy, who was eventually martyred, but despite being linked to him by multiple witnesses she survived that too.

In the fevered religious environment of the time, it took courage to harbor a hunted man.

Dr. MacLeod said: “A lot of times when we think about women in the early modern religious context we think of this quiet, meek kind of devotion but that is not Marion Walker.”