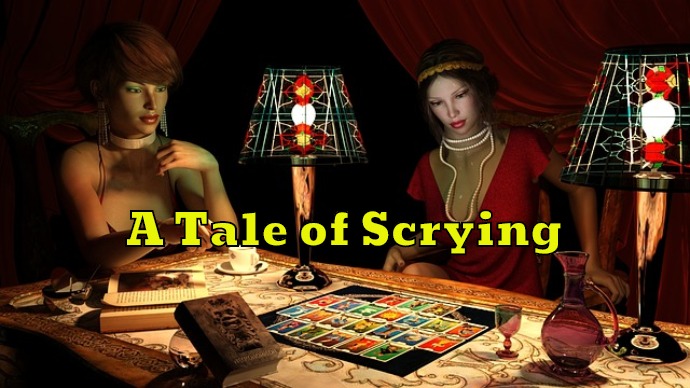 A Tale of Scrying

Divination is the art of discovering that which is hidden. This doesn’t mean that all diviners are fortune tellers, or that, by divining, you plan to discover things you didn’t have the right to know.

We believe that information is power, and that, if the Gods forbade this information to us, we would not be able to discover it. When we divine, it is either within a ritual context or meditated on for quite a while. When the ethics
are in dispute, most will opt to not risk it, but the Gods gave us right and wrong, and one of our tools is the
ability to discern them. Sometimes, divination is obviously wrong, especially when used unnecessarily, let
your conscious be your guide.

There are two main forms of divination used by Wiccans, excluding Tarot, Numerology, Astrology and
Rune-Casting, which require less extraordinary ability and tell their secrets more through randomization
and synchronicity than pure (albeit influenced) conjecture. Pattern Work (not to be confused with pathworking) shows what results a theoretical action will have and is usually used by psychics. At its least, Pattern Work is the application of logical theorizing to the present and can be detailed in a series of “and”, “or” and “if-then” statements applied with the recognition of patterns or synchronicity. For a particularly base example, a friend (and switchboard operator) had noticed an unusual number of extra “W’s,” “T’s” and “O’s” appearing on her word processor. Emboldened, she played the number “986” which was both part of her phone number (and the numbers for WTO) and the month/year of her second anniversary. The number drawn was “222.”

Astral and dream Pattern Work is the act performing pattern work while asleep or projecting, to allow the
greater consciousness to fill in where we cannot. Some psychics see patterns as colors and designs, which
change as decisions are made, others see the actual events alter. “Tuning in” to the patterns requires a
strong attention to detail, and the realization that the slightest action can alter the Patterns completely. It’s
very easy to get caught up within the patterns and “lose” yourself, so with Pattern Work, as in all things,
moderation.

The more common form of Divination is scrying, which is the “classical” divination, including the clichéridden Crystal or Mirror gazing. The Magickal Mirror existed long before Snow White’s beautiful but
misguided stepmother gazed into one and wasn’t pleased by her looks, and the Crystal Ball was too
expensive an item for many of the charlatans usually associated with it, having long been delegated to the
realm of the “professional” metaphysicist, usually no more than the town leech.

Tradition decrees that the Crystal ball be clear, preferably quartz, and lit only by candle or moonlight, but it
seems that people respond differently to different Crystals. A friend has a sphere of blue lace agate that she
divines in, another uses the face of a crystal prism which is hung in his window to gather the power of the
sun. Although the traditional crystal ball of the motion picture industry is kept in an ornate stand, often
metal, the crystal ball of the scyrer rests on black cloth, usually velvet, which is occasionally draped over a
stand to prevent scratching and give an ideal “blank” background. I’ve been told that using different color
cloths influences the outcome, and are especially powerful for discerning information geared toward
certain people or things associated with that color.

Scrying mirrors are also decreed by tradition to a few distinct forms, but the personalization of your mirror
is what makes it work, not getting all of the Theban script in the proper alignment! Although usually black,
often concave and rarely seen in daylight, the scrying mirror is personal, and it’s the person who needs to
feel comfortable.

If you’ve been doing Wicca or Metaphysics for a while, you’re probably most comfortable in a circle. After
it’s cast, try doing the air visualization to “free your mind.” Then, gaze deeply into the mirror or ball. Blink,
shift, scratch, cough, and move normally, don’t stare like a television medium! If you do stare, all that
you’ll see is spots, mist, and all the other creatures of eyestrain, and trust me, eyestrain sucks. If you can’t
blank your mind, repeat a nonsense word in your head. This sounds bizarre, but I’ve been known to
meditate on the phrase “blah, blah, blah,” while scrying. It occupies my outer mind, like the music I play to
write, or having the TV on while I study, while my inner mind can concentrate on the activity at hand. It
has been my experience that as you awaken your brain, you need more stimuli, and I envy anyone who can
sit in the darkness and focus all of their mind onto one thing, I wish I could!

Probably not the first time, but eventually as you scry (limit yourself to one-half hour at a time at first )
you’ll begin to see misty forms in the surface, whether these are no more than cloud-like shapes waiting for
interpretation or pictures that slowly form changes from person to person, but you will see something with
persistence. If you can’t get a mirror or ball, try a cup, bowl or plate of water. Black plates and bowls are
often available at housewares shops for under two dollars, and make great containers for scrying water.

My favorite scrying mirror was a piece of window pane in a frame, the back of which was spray-painted
copper. Initially, this mirror was meant to go onto the altar under a large copper censer, to keep ash from
hitting the altar cloth and to reflect its little light toward the copper ceiling of the temple (rescued from an
old theater before it was demolished.) I was cleaning the mirror one last time, filling the frame with a saltwater solution, and rinsing it in rainwater (it was raining, which made this quite easy.)

I’ve always been very in-tune with storms, and as I was gazing into this mirror absent-mindedly (the best way to gaze,) I caught a flash of reddish lightning in it, that lasted at least two seconds. The only problem was that, while
it was raining, it wasn’t storming. I contemplated the sky for a few minutes after this, trying to figure out
where the lightning flash had come from. I set down the mirror, and went to sit down on the porch when a
very red flash of lightning crashed overhead, leaving me with spots in my eyes and a migraine that lasted a
few hours.

There is no doubt in my mind that I was warned not to look up at this lightning flash by this
little mirror, which was nicknamed “The Little Mirror that Could.” For about three months I used this
mirror to try to find out everything I could, to no avail. Sure enough though, this mirror glowed every time
there was a storm coming, and when a fellow student in a storm-prone area noticed the glow while visiting,
I gave it to him.

The story of this mirror’s suicide is especially fascinating. This same student was on the phone with me
when The Little Mirror that Could leaped off the wall and shattered into about fifty pieces. While we were
talking, trying to figure out what happened, he looked out his window and said that it looked very ominous.
Another minute later his emergency weather radio went off, there was a tornado in his area. As he went
into the basement, as local sirens squealed and he stayed on the line with me, courtesy of cellular miracles,
but was blacked out after a while. An hour later he called back. The twister had passed not two hundred
yards from his house, following the road. Most of his windows on one side were broken, and he had a cut
from a jar of pickles bursting in the basement, but the house, cats, chickens, and dogs were fine. We were
both positive the mirror had warned him of this, so we went to make another one, going together to a
friend’s house, about 10 miles away from his, three days later. When we asked for another pane of glass
(he’d given me the first one out of a box he had) he said he had none, because three days earlier the entire
contents of the box were destroyed when a nearby tornado knocked over his tool shed. With a little
calculation, we figured the panes had been destroyed at the same time his mirror had fallen.