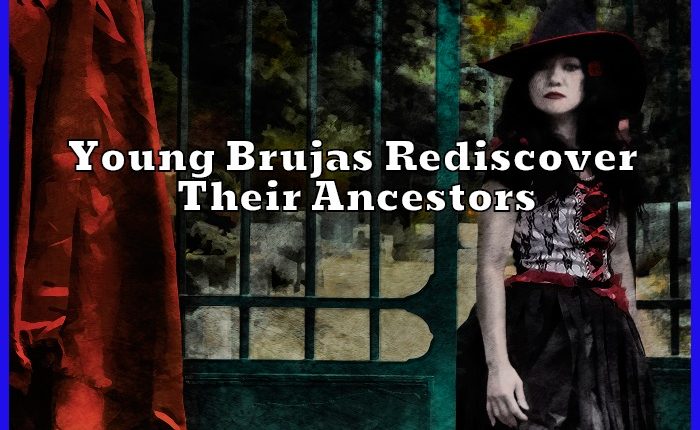 Brujería on the rise as young people discover their ancestors

Brujería, the Spanish language word for “witchcraft,” is typically used to refer to various spiritual practices that have been used by African, Caribbean, and indigenous Latin American populations for centuries. The West-African Yoruba religion, for instance, is estimated by some anthropologists to have been practiced for thousands of years. And Santería (also known as Lucumi) is an Afro-Cuban religion that took shape alongside the rise of Spanish colonization—and the arrival of Roman Catholicism—in Latin America in the 15th and 16th centuries.

Today, brujería—and its accompanying bruja (Spanish for witch) title—are being taken up by a growing community of primarily Latinx women and femmes who want to tap into the mysticism of their heritage, often sharing images of their practice through social media or incorporating bruja culture into their creative pursuits.

“There are so many different kinds of brujas,” NoNo, a practicing bruja and DJ, tells Broadly. NoNo is El Salvadoran, with Mayan ancestry, but grew up in Los Angeles. She is the founder of Las Brujas Radio, an online radio talk show based in Oakland, California that holds space for spirituality as a form of healing in femme communities of color. “[For me], you can be a bruja from Africa, from an indigenous background, an Asian bruja, a fucking European Viking. There’s just a lot of ways that someone can identify as a witch or a healer or as a person that’s tapped [into spirituality].”

The rituals involved with brujería have traditionally been meticulously passed down from generation to generation. The practices typically involve cleansing, ancestor worship, lighting candles, and honoring the earth (through goddesses Oshun and Elegua, for instance). And in some cases, such as in NoNo’s practice of Santería, ceremonies entail wearing all-white, singing, and preparing sacred offerings.

The origins of contemporary brujería—especially as presented through its Afro-Latinx roots—can be most vividly understood through the development of spiritual practice in the face of the Spanish Inquisition and its colonial tribunal in Mexico.

In “Sex and Sin, Witchcraft and the Devil in Late-Colonial Mexico,” Cuban-American anthropologist Ruth Behar underscores how the Catholic church played an integral role in strengthening the spiritual connections of African, indigenous, and lower-class Spanish populations in Latin America. By pushing marginalized communities to the outer fringes of society in an effort to eradicate the superstitious practice, the Inquisition ultimately helped create “interaction of people and beliefs…that proved a fertile ground for the flowering of a popular magical and religious culture beyond [the Inquisition’s] control.”

During this time, women who practiced brujería were typically healers, midwives, and vendors of food and alcohol. And while mysticism was practiced with all sorts of intentions by both sexes, sexual and romantic rituals performed by women were particularly prevalent. Baher indicates that this phenomenon could be explained by the fact that, in the 16th century, women of all social levels lost most of their legal autonomy after marriage—while their husbands retained the right to beat their wives or have illicit affairs. So, rather than counting on a judiciary and religious system that would only let them down, women turned to sexual magic and witchcraft to combat omnipresent patriarchal domination. But soon, due to colonization, brujería became a taboo practice that warranted prosecution and, for those considered full-blown witches, execution. The negative stereotype of the bruja as an evil enchantress has lingered culturally ever since.

Now, however, modern-day brujas are taking back the practice and battling that taboo. “We’re reclaiming our power, for far too long have we practiced in secrecy due to fear/society,” Brooklyn bruja Emilia Ortiz, known by 83,000 Instagram followers as @Ethereal.1, writes to Broadly. “Now though? It’s our time. The same way other women/femmes are reclaiming their power in other areas—this is no different.”

Some brujas, like NoNo, feel the spiritual call from their ancestors. “My great-grandmother was a curandera, a healer, which is another word for bruja. But as she got older, it was like people forgot about her. People started looking at her like she was crazy,” NoNo says. “And I think that all that kind of sensitivity is passed down, you know? If your mom or your grandma was doing a thing, it’s kind of a given that you might.

“[The religion] is very oral, you can’t just read the book about it and get it. You have to get taught through oral education and an elder,” she adds.