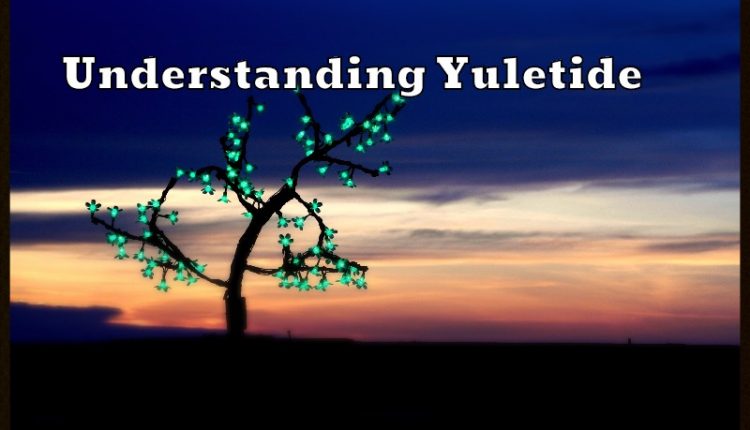 Yuletide is one of the favorite Pagan sabbats. It marks the beginning of longer days as dark gives way to light. On the morning following the winter equinox, the sun climbs just a little higher and stays a little longer in the sky each day. Known as Solstice Night, or the longest night of the year, the sun’s “rebirth” is celebrated with much joy.

In most traditions, Yule is the Sabbat that begins the Wiccan Year.

Though it’s typically celebrated on December 21st, the exact moment of the Solstice varies from year to year due to a slight misalignment between the Gregorian calendar and the actual rate of the Earth’s rotation around the Sun. It also occurs at differing local times, so that depending on where you live, it may fall the day before or the day after the date listed on any given calendar. For this reason, a date range of December 20-23 is often cited in sources on the Wheel of the Year.

On this night, we celebrate the rebirth of the Oak King, the Sun King, the Giver of Life that warmed the frozen Earth. From this day forward, the days will become longer.

In years gone by when the days grew colder and the nights grew longer, our ancestors would light candles and gather around fires to lure back the sun. They would bring out their stores of food and enjoy feasting and festivities. Dances were held and songs filled the air and homes were decorated. Until the 16th century, the winter months were a time of famine in northern Europe. Most cattle were slaughtered so that they wouldn’t have to be fed during the winter, making the solstice a time when fresh meat was plentiful. Evergreens were cut and taken indoors to symbolize life, rebirth and renewal. These boughs were thought to have power over death because their green never faded, and they were used to thwart winter demons and hold back death and destruction. Because of their strength and tenacity, they were also believed to encourage the Sun’s return.

A sprig of Holly was kept near the door all year long as a constant invitation for good fortune to visit the residents. Mistletoe was also hung as decoration.  It represented the seed of the Divine, and at Midwinter, the Druids would travel deep into the forest to harvest it.

The ceremonial Yule log was the highlight of the Solstice festival. The log must either have been harvested from the householder’s land or given as a gift. It must never have been purchased.

Once dragged into the house and placed in the fireplace it was decorated in seasonal greenery, doused with cider or ale, and dusted with flour before set ablaze by a piece of last years log, (held onto for just this purpose). The log would burn throughout the night, then smolder for 12 days after before being ceremonially put out.

The Yule Tree was also another important symbol in pagan tradition. Originally, it represented the Tree of Life or the World Tree among early pagans. In ancient times it was decorated with gifts people wanted to receive from the gods. It was adorned with natural ornaments such as pinecones, berries and other fruit, as well as symbols sacred to the gods and goddess.

Wreaths were also traditional in ancient times, for they symbolized the wheel of the year and the completion of another cycle. They were made of evergreens and adorned with cones and berries and hung as decoration throughout the home. They were also given as gifts to symbolize the infinity of goodwill, friendship, and joyfulness.

While famine may not be part of the modern pagan’s world, much of the celebration remains the same.

We gather with loved ones, we feast and light candles, we decorate with evergreens and holly, and some of us still keep the tradition of the Yule log alive. Those without a fireplace may drill three holes into a log and place candles into the holes, representing the Yule log of ancient times.

As Christianity spread across the globe, they associated their Christmas with our Yule, and today, many Pagans exchange gifts as part of their Yuletide celebration. There have been some who view this as an amalgamation of Christmas and Yule. Yet, if we look back, we see the Yule log was often given as a gift, from one house to another, and wreaths were exchanged. As such, the giving of gifts at this time of the year predates Christianity.

The actual beginning of Yule is impossible to date, as records of celebrations during the winter equinox have been discovered in caves and as petroglyphs, around the world. What we do know, is that people have been celebrating the equinox since mankind first noticed the lengthening of daylight following the celestial event.

Stonehenge, located in Wiltshire, England, draws thousands of people annually to celebrate the return of the sun on the winter equinox.

Each civilization has celebrated the equinox, or Yuletide, across the centuries, and in most cases, the ancient traditions have been kept alive by today’s Pagans.

The Feast of Juul was a pre-Christian festival observed in Scandinavia at the time of the December solstice. Fires were lit to symbolize the heat, light and life-giving properties of the returning sun. A Yule or Juul log was brought in and burned on the hearth in honor of the Scandinavian god Thor.

A piece of the log was kept as both a token of good luck and as kindling for the following year’s log. In England, Germany, France, and other European countries, the Yule log was burned until nothing but ash remained. The ashes were then collected and either strewn on the fields as fertilizer every night until Twelfth Night or kept as a charm and or as medicine. (1)

Saturnalia, the most popular holiday on the ancient Roman calendar, derived from older farming-related rituals of midwinter and the winter solstice, especially the practice of offering gifts or sacrifices to the gods during the winter sowing season.

The pagan celebration of Saturn, the Roman god of agriculture and time, began as a single day, but by the late Republic (133-31 B.C.) it had expanded to a weeklong festival beginning December 17. (On the Julian calendar, which the Romans used at the time, the winter solstice fell on December 25.)

During Saturnalia, work and business came to a halt. Schools and courts of law closed, and the normal social patterns were suspended.

People decorated their homes with wreaths and other greenery and shed their traditional togas in favor of colorful clothes known as synthesis. Even slaves did not have to work during Saturnalia, but were allowed to participate in the festivities; in some cases, they sat at the head of the table while their masters served them.

On the last day of Saturnalia celebrations, known as the Sigillaria, many Romans gave their friends and loved ones small terracotta figurines known as signillaria, which may have referred back to older celebrations involving human sacrifice. (2)