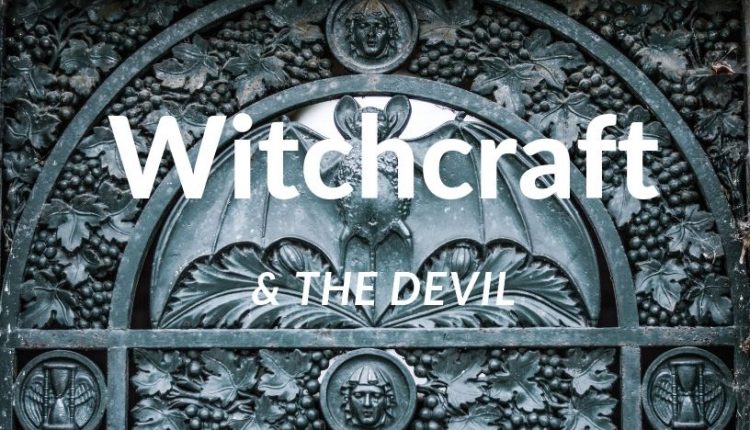 Witchcraft and the Christian Devil

Christianity’s Prince of Supreme Evil. The Devil, or Satan, is not a god of Wiccans and Pagans. The association of witches with the Devil grew in the middle Ages and reformation when belief in a personal Satan as the agent of all evil was particularly strong.

Accusations of Devil-worship were not limited to witches. Christians charged the same of Jews, Muslims, Pagans, Cathars, Albigenses, Waldenses, “red Indians” and other heretics, and Protestants and Catholics accused each other of it as well. Even Martin Luther was said by Catholics to have given himself over to the Devil.

Devil comes from the Greek diabolos (“slanderer” or “accuser”), translated from the Hebrew satan. The concept of the Devil as archfiend of evil developed slowly over many centuries, becoming a composite of Lucifer, the fallen angel whose pride and ego got him expelled from heaven; Satan, the tempter of man; and various pagan deities such as Pan and Cernunnos.

Satan plays a minor role in the Old Testament as the opponent of man, dispatched by God to test man’s faith. He is not evil and is an angel in the kingdom of heaven. In Job, Satan follows God’s instructions to destroy Job’s family and possessions and cover him with running sores in an effort to tempt him into cursing God.

In the New Testament, Satan becomes more personal and is the great antagonist of God as well as man. The book of revelation forecasts that Christ, in his second coming, will bind the Devil for 1,000 years, at which time the Devil will reappear one final time, as the Antichrist, before being destroyed.

The dualism of Christianity became firmly established, with a god of light and goodness and a god of evil and darkness. By the ninth century, the Devil held a central position in Christianity. Satan, the Devil, was believed in as a real, potent being who possessed terrible supernatural powers and was intent upon destroying man by undermining his morals. In this pursuit, he was aided by an army of evil demons (a corruption of the Greek term daimon or daemon, meaning “divine power”).

This army was expanded to include heretics and sorcerers, who were considered outlaws of the church, and whose mAgIC posed a threat to the divine miracles of the church. Witches were included first as associates of sorcerers, then as heretics. Preachers pounded fear of the Devil into their followers by constantly inveighing against his attempts to pervert people and turn them away from God. Satan’s kingdom was the material world. He would tempt people with false riches, luxuries, and carnal pleasures, only to claim their souls for eternal damnation in the end. His chief means of attacking others was through demonic possession. Pacts with the Devil, which date to the 6th century, became implied; any consort with the Devil automatically meant one had entered into a diabolic pact.

John Stearne, the assistant to Matthew Hopkins, England’s notorious witch-hunter of the 17th century, was of the opinion that the preachers’ obsession with Satan encouraged witches to worship him. Agnes Wilson, an accused witch of Northampton in 1612, was asked how many gods she believed in and replied, “Two—God the Father, and the Devil.”

Her answer was no surprise in light of the prevailing social-religious climate, but it was taken by her prosecutors as an admission of Devil-worship. The Devil was said to appear in many guises in order to fool people. His most common human shape was that of a tall black man or a tall man, often handsome, dressed in black. Henri Boguet (1550–1619), a jurist in witch trials, stated in Discourse des sorciers (1602) that:

Whenever he [the Devil] assumes the form of a man, he is, however, always black, as all witches bear witness. And for my part I hold that there are two principal reasons for this: first, that he who is the Father and ruler of darkness may not be able to disguise himself so well that he may not always be known for what he is; secondly, as proof that his study is only to do evil; for evil, as Pythagoras said, is symbolized by black.

The Devil also could appear in disguises, such as a saint, the Virgin Mary, comely young women, and preachers. He could appear in a multitude of animal shapes, most commonly a dog, a serpent or a goat (see metAmorphosIs). He also had ugly appearances: as the alleged god of witches, he was portrayed as half-human, half animal, like Pan, with horns, cloven feet, hairy legs, a tail, a huge penis, glowing eyes and Saturnine features.

By the 18th century, literalist views of the Devil were losing power. Enlightenment philosophers and writers were questioning the origins of evil and were looking within the human psyche for answers. The Devil became more a metaphor in literature.

In folklore, the Devil was often portrayed in a lighter fashion, perhaps to mitigate the fear inspired by the clergy. He was often buffoonish and called by nicknames such as Jack, Old Nick, Old Horny and Lusty Dick. He could be easily tricked. The distinction between the Devil as Prince of Evil and his hordes of demons often blurs. The phrase “the Devil” has referred to both. Joseph Glanvil observed in Saducismus Triumphatus (1689) that “The Devil is a name for a body politic, in which there are very different orders and degrees of spirits, and perhaps in as much variety of place and state, as among ourselves.” The worship of Satan as a god of power and materialism is practiced by some groups. Pagans and Wiccans do not worship the Devil. Pagan deities, and the Horned God of witches, are often confused in the public mind with the Devil.