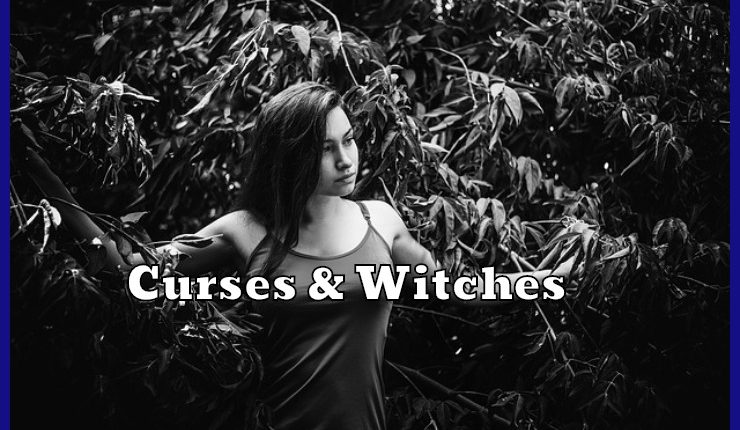 The most dreaded form of magic, curses are universal. They are “laid” or “thrown” primarily for revenge and power but also for protection, usually of homes, treasures, tombs, and gravesites. A curse can take effect quickly or may be dormant for years. Curses have been laid upon families, plaguing them for generations. Any person can lay a curse by expressing an intense desire that a particular person comes to some kind of harm.

However, the success of a curse depends upon the curser’s station and condition. Curses are believed to have more potency—and therefore more danger—when they are laid by persons in authority, such as priests, priestesses or royalty; persons of magical skill, such as witches, sorcerers and magicians; and persons who have no other recourse for justice, such as women, the poor and destitute and the dying.

Deathbed curses are the most potent, for all the curser’s vital energy goes into the curse. If a victim knows he has been cursed and believes he is doomed, the curse is all the more potent, for the victim helps to bring about his own demise, through sympathetic magic. However, curses work without such knowledge on the part of the victim. Some victims are not told a curse has been laid, lest they find another witch to undo the spell.

Like a blessing, a curse is a calling upon supernatural powers to effect a change. Intent makes the difference between benefit and harm.

Some witches and sorcerers perform both blessings and curses as services to others, either to clients in exchange for fees or in carrying out judicial sentences. As Plato noted in the Republic, “If anyone wishes to injure an enemy, for a small fee they [sorcerers] will bring harm on good or bad alike, binding the gods to serve their purposes by spells and curses.”

The most universal method of cursing is with a figure or effigy that represents the victim. Waxen effigies were common in ancient India, Persia, Egypt, Africa and Europe, and are still used in modern times. Effigies are also made of clay, wood and stuffed cloth. They are painted or marked, or attached with something associated with the victim—a bit of hair, nail clippings (see hAIr And nAIls), excrement, clothing, even dust from his footprints—and melted over, or burned in, a fire. As the figure melts or burns, the victim suffers and dies when the figure is destroyed.

The Egyptians often used wax figures of Apep, a monster who was the enemy of the sun. The magician wrote Apep’s name in green ink on the effigy, wrapped it in new papyrus and threw it in a fire. As it burned, he kicked it with his left foot four times. The ashes of the effigy were mixed with excrement and thrown into another fire. The Egyptians also left wax figures in tombs. Waxen images were popular during the witch hunts, and numerous witches were accused of cursing with them. James I of England, writing in his book, Daemonologie (1597), described how witches caused illness and death by roasting waxen images:

To some others at these times he [the Devil], teacheth how to make pictures of wax or clay. That by the roasting thereof, the persons that they beare the name of, may be continually melted or dried away by continual sicknesses. They can bewitch and take the life of men or women, by roasting of the pictures, as I spake of before, which likewise is verie possible to their maister to performe, for although, as I said before, that instrument of waxe has no vertue in that turne doing, yet may he not very well, even by the same measure that his conjured slaves, melts that waxe in fire, may he not, I say at these times, subtily, as a spirite, so weaken and scatter the spirites of life of the patient, as may make him on the one part, for faintnesses, so sweate out the humour of his bodie. And on the other parte, for the not concurrence of these spirites, which causes his digestion, so debilitate his stomacke, that this humour radicall continually sweating out on the one part, and no new good sucks being put in the place thereof, for lacke of digestion on the other, he shall at last vanish away, even as his picture will die in the fire.

As an alternative to melting, effigies are stuck with pins, thorns or knives. Animal or human hearts may be substituted for effigies. Hearts, animal corpses or objects which quickly decompose, such as eggs, are buried with spells that the victim will die as the objects deteriorate.

In Ireland, “cursing stones” are stones that are stroked and turned to the left while a curse is recited. Gems and crystals are often said to have the power to hold curses; the Hope Diamond, purchased by Louis xVI from Tavernier in 1668, is deemed cursed because its owners have suffered illness, misfortune and death. 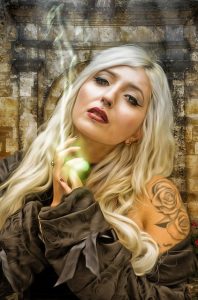 It is against Wiccan ethics and laws of the Craft to lay curses. Witches believe that a curse will come back on the curser in some form. Some, however, believe cursing is justified against one’s enemies. Some witches approve certain types of curses, such as binding spells to stop acts of violence.

Witches from ethnic cultures believe curses are justified. Repelling curses. Amulets that have been made according to various formulas are said to repel curses, as is dragon’s blood, which is used in herbal mixes for protection.

A cloth poppet stuffed with nettles, inscribed with the name of the curser (if known), then buried or burned, also breaks a curse. Nettles sprinkled about a room add protection. The oIls of rosemary and van-van, and various mixed Vodun oils, placed in baths or used to anoint the body, are other remedies. Burning a purple candle while reciting a spell is yet another method. Hindu sorcerers turn curses in the opposite direction, “upstream,” sending them back to slay their originators. Traditionally, the most propitious time for both laying and breaking curses is during the waning moon.