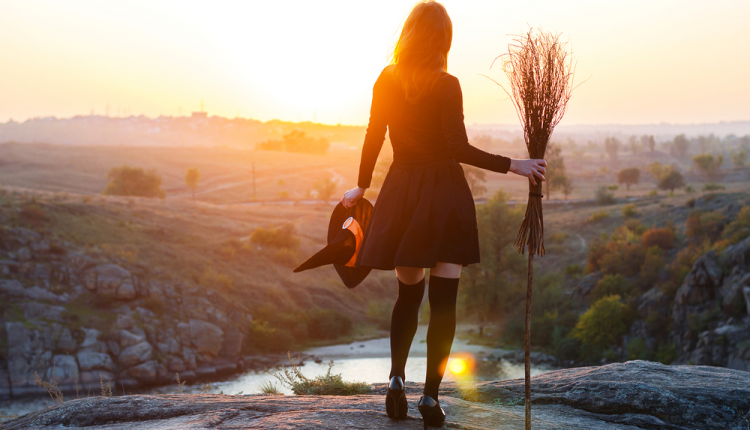 The fantasy image of the witch riding around on her broomstick is actually based on fact. Broomsticks were common ritual instruments in Western European fertility rites. People rode around fields, women on brooms, men on pitchforks, jumping high in revelry to encourage crops to flourish.

The pitchfork, the male tool, would eventually be identified as among the devil’s attributes. Why a broom? It symbolizes the perfect union of male and female energies, with the stick representing the male force, plunged into and attached to the female straw.

Vestiges of the broom’s role in fertility magic survive in the handfasting custom of jumping the broomstick. In ancient Greece, the broomstick was considered an attribute of Hecate, Matron of Witches and Midwives. It became, for a time, the professional emblem of midwifery, similar to a barbershop pole or pawnbroker’s balls. The use of broomsticks is not restricted to European magic: The symbol arose independently in Mexico as well.

The conquistadores, familiar with these images from home, were shocked by images of Tlazolteotl, the fierce Aztec spirit of love and witchcraft, riding on a broomstick, naked but for jewelry and a conical bark hat, accompanied by raven and owl familiars. The broom is used for a variety of purposes: It has evolved into the emblem of witchcraft as surely as it once represented midwives. They may be displayed as a source of pride and as a device to memorialize the Burning Times Brooms serve as an amulet against malefic magic Brooms are used in a vast variety of magic spells, especially those for cleansing, banishing and fertility The broomstick was the traditional tool used for topical application of witches’ flying ointments.

Various types of brooms may be used: Single use ritual brooms, usually loosely put together from botanical material and taken apart and dispersed immediately follow ing use Special ritual magical brooms, only to be used in ritual, as beautifully carved and crafted as any magic wand or sword. These are particularly popular amongst modern pagans and Wiccans A plain household broom, the same one used to sweep the floor, the staple of Hoodoo banishing spells. Spiritual and mundane household cleansings may be accomplished simultaneously, through the use of ritual floor-washes

To Sweep or Not to Sweep?

In some traditions, modern paganism or Wicca for instance, a ritual broom may never touch the floor, let alone dust anything. Brooms, whether single-use ones or exquisite hand-crafted tools are reserved for ritual use. Hoodoo, on the other hand, is practical magic: there’s no need for two brooms where one will suffice.

A household broom will serve both mundane and magical purposes, often simultaneously, as with the use of ritual floor washes.

Floor washes accomplish two purposes at the same time: a magic spell is cast and the floor is cleaned. Cleaning the floor effectively casts the spell. This does not really indicate a split between European and African-derived magical systems. Hoodoo’s extensive use of the broomstick may, in fact, derive from its European roots.

However, possessing an extensive collection of expensive tools reserved solely for ritual use has certain economic implications. One needs space to keep these items as well as privacy to practice ritual in safety. Instead, mundane activities can camouflage magical ones. Magic spells may be discreetly yet consistently cast, during such everyday activities as sweeping or scrubbing one’s front steps.

Whether the fifteenth-century European woman, for instance, who typically resided in a small, crowded house lacking privacy and personal storage space, and who lived in mortal fear of accusations of witchcraft, would have considered it safe and practical to maintain a broomstick reserved for ritual use in addition to a household tool is something we may never know.

The most basic w itch’s broomstick is constructed from an ash stick, which provides consistent magical protection, bound with birch twigs, meant to entangle low-level malicious spirits An alternative choice would be willow twigs, because they are the tree belonging to Hecate, Dark Moon Goddess and supreme teacher of magic (Circe and Medea rank among her finer students) Small handcrafted brooms are crafted to be placed and maintained on altars. Embellish the brooms to coincide w ith their purpose. For instance, decorate a small broom dedicated to sea spirits w ith sea glass and shells