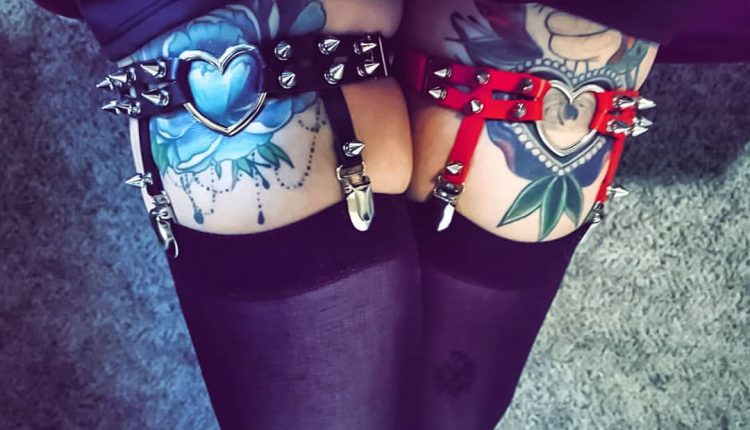 Garters and Witches & How To Make Your Own

Worn in various rituals as magical properties and are also used as badges of rank.  The different colors of the Witch Garter carry a special meaning. Green is the color of fairies, red is protection against bewitchment and silver is associated with the moon. In modern witchcraft, the witch garter is considered the ancient emblem of the high priestess. In some traditions, a high priestess who becomes Queen Witch over more than one coven adds a silver buckle to her garter for each coven under her. It is also used in the use of “lithomancy”, a type of divination where 13 stones are cast inside a witch garter.

In Doreen Valiente’s book An ABC of Witchcraft, she mentions a couple of 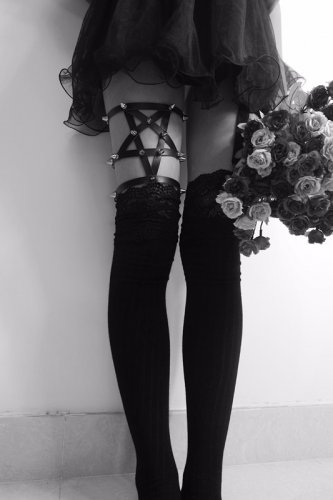 historical instances of Medieval witchcraft with garters. A witch wearing a garter is depicted in a drawing from the Early Modern Period. Whether the artist was just including typical fashion for the time period or whether it was a stereotype of witches isn’t known. Garters have come in and out of fashion for centuries. Both woman and men have worn them to keep stockings up and shirts tucked in. Witches of past centuries might have used them as amulets because they could be easily hidden from plain sight.

The magickal garter has significance dating back to prehistoric times. Cave art in eastern Spain that dates to the Paleolithic period shows a sorcerer performing in a ritual while wearing nothing but a pair of garters just below his knees.

In many traditions, the garter is worn only by a Witch Queen, or Queen of the Sabbat. However, the traditional dress of Morris dancers consists of garters, usually red, and “Green Garters” is a traditional Morris Dancer tune.

In the trial recond of Margaret Johnson (Lancshsire 1633) the Devil was said to wear: “a suite of black, tyed about with silke pointes (garters).”  If we take the position that the “Devil” was the Magister of the coven, then we see that the garter is not the sole province of the Queen of the Sabbat, but was also worn by men.

Red garters were said to be worn by a witchcraft coven Summoner. The Summoner’s job was to advise members on meeting days and times. The red garters signified to others that s/he was genuine.  Gerald Gardner used the red garters as a plot device to this effect in his novel about the witch cult, High Magic’s Aid.

In some traditions the garter is prepared with green leather or velvet with a lining made of blue silk. In others, the garter is made of red leather or snakeskin. There is usually one large, silver or gold buckle on the garter, representing the Queen’s own coven, with additional, smaller, silver buckles for each of the other covens under her authority. The garter is worn on the left leg, just above the knee.  It may be fastened with the large buckle or with silk ribbons.

Pennethorne Hughes states that when a tortured witch was likely to reveal others, he or she may be murdered in jail by the other witches to avoid further arrests and tortures. To prove that the murder had been done, under those circumstances, a garter would be left tied loosely around the victim’s throat. Such a potential informant would be known as a “warlock,” meaning traitor. The case of John Stewart of Irving in 1618 is one such example. John Reid, of Renfrewshire in 1696, is another. Many legends and folk tales have a garter as the leitmotif.

The Witch Garter is found in English history as being linked to the creation of the Order of the Garter. This order is Great Britain’s highest and most ancient order of knighthood. The most widespread story states that the countess of Salisbury was dancing with King Edward III at a court function. As they danced, the countess’s garter fell to the ground. The king picked it up and, to save her embarrassment, put it on his own leg with the words, “Honi soit qui mal y pense” (Shame be to him who thinks evil of it.”) He went on to found the Order of the Garter, with that phrase as its slogan. The precise date for the founding of the order is not known, since the records have been destroyed, but it is thought to be 1344 or 1350. The most likely date, however, appears to be 1348.Margaret Alice Murray mentions that it took more than a dropped garter to embarrass a lady in the 14th century, even a lady of the court. However, if the garter dropped was a ritual one, demonstrating that its owner was in fact a leader of the Old Religion, then there would be very real embarrassment, particularly since there were high personages of the Christian Church in attendance at the event. Edward’s action, then, was incredibly smart thinking, for in placing the garter on his own leg, he not only saved face for the countess but also proclaimed himself prepared to be a leader of the Pagan population as well as the Christian. This was a clever move taking into account that a large portion of his subjects were still Pagan at that point in time. Murray is puzzled by Edward’s words, but if deemed as referring to the Old Religion itself, rather than the action or the garter, then they make very good sense. Edward then went on to form the Order of the Garter with twenty-four knights, himself, and the Prince of Wales-a total of twenty-six, or the number of two traditional covens. As Chief of the Order, the king wore a blue velvet mantle powdered over with 168 tiny garters. Along with the one on his leg, that made 169, or 13 times 13.

Feeling inspired to make your own?

It’s super easy and fun to do. Not to mention, it’s unique! Buy a cheap LACE garter online or in a lingerie store. Remember to choose a color to match your intention:

Next, adorn it with charms, beads, and whatever suits your intentions. It’s best if your garter is lace so that there are holes to easily add charms. Buy charms and beads at a local craft store or online. They make Celtic charms, runic charms, suns, moons, stars, and more! Add one or ten to your magical garter. Your garter amulet will be hidden under your skirt, dress, or loose pants so make it what you want it to be. Another option is to purchase a flapper-costume garter pre-fitted with a small flask, then add your favorite enchanted elixirs, moon water, magical oils, etc. 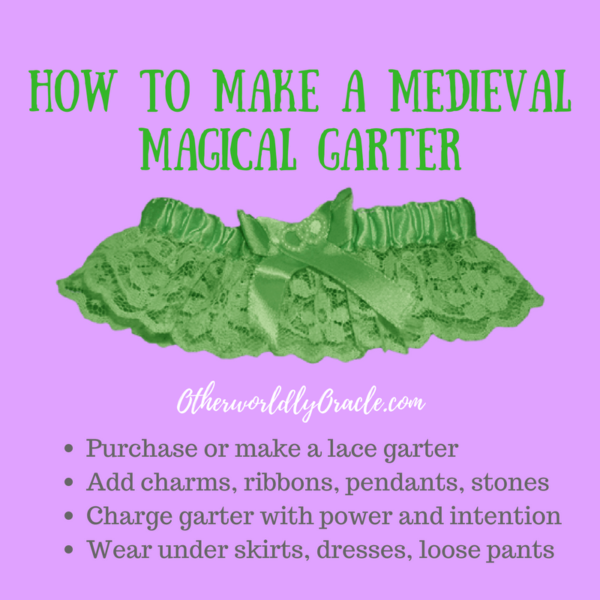