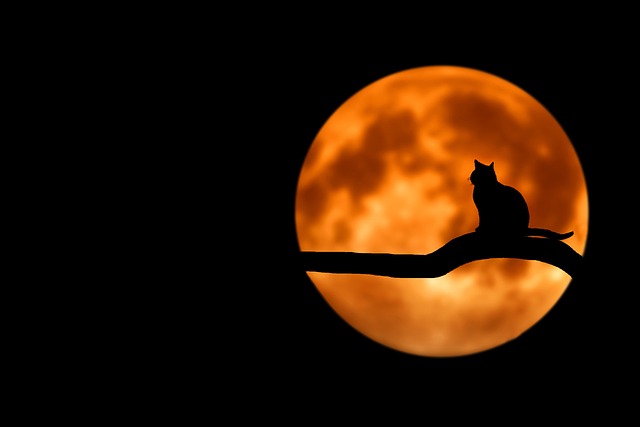 Blackcats  – either you love them to the extreme or you completely avoid them at all costs out of fear the reason that people fear something is because they haven’t taken the time to understand what it is they’re afraid of.

5. Just As Adoptable
It’s been reported several times over that because black cats are regarded as being “bad luck” they are the type of colored cat with the most difficulty when it comes to getting adopted. Contrary to popular belief, this is actually false. See, unfortunately, black cats do have a very high rate of being put to sleep which is incredibly disheartening, but they actually have one of the highest adoptable rates out there.

A vet who conducted the study for the ASPCA found the following information to be true. A reason for this is said to be simply because there are more cats with solid black coats than any other pattern. Did you know that around Halloween lot’s of shelters won’t put up black cats for adoption because they fear the cats will be used as props and later abandoned and in some cases even sacrificed? Also, August 17th is Black Cat Appreciation Day!

4. More Than Just One Breed
When you see one black cat you’ve probably seen them all, right? That’s pretty much a gross assumption because you couldn’t be more wrong. The CFA or the Cat Fanciers’ Association formally recognizes that there are 22 different breeds of cat that are able to produce a solid black coat. The only cat out of these 22 that lacks any other color pattern and is solely black is the Bombay. This is the breed of cat that people generally see in their mind’s eye when they imagine a black cat. They were actually bred by a woman named Nikki Horner back in 1965 after she became enamored with the black panther. She wanted to create her own “mini version” and achieved success by breeding a black American Shorthair and a sable Burmese. The cat was officially given its recognition as its own breed back in 1970 by the CFA.

3. A Sailor’s Best Friend
Pirates and sailors alike were notorious for having plenty of superstitions while out sailing on the seven seas. Who would have thought that some of those superstitions included cats? One of said superstitions goes as such: If you were a sailor about to go off and embark on a voyage across the sea and a cat jumped onto your ship only to immediately jump off…leave. British sailors believed that this was an omen signifying that your ship wouldn’t make it to its final destination and would instead sink. They would also make sure to keep them onboard their ships in order to help keep the mice infestation to a minimum. One of the most famous of these cats to do so was a Mr. Tiddles. He traveled more than 30,000 miles during his entire career with the Royal Navy and loved playing with the ship’s bell-rope.

2. Bad Luck Origin
These days it seems like a given what with pop culture and different forms of media that black cats are the go-to mascots for bad luck, but does anyone actually know why? Well, it all started some time ago back in the Middle Ages. At some point, Europeans began associating black cats as being in line with good old Satan himself and his demonic minions as we previously mentioned. Much like the Salem Witch Trials of 1693, the people back then weren’t the brightest and this caused a widespread panic. The people even went as far as persecuting black cats by off-ing them and sometimes their owners. That fear was brought over when the Pilgrims landed at Plymouth rock, on land that was not theirs to claim, and brought over with them “a devout faith in the Bible.” To this day, people are still afraid.

1. Good Luck
Yes, it is surprisingly true what with the aforementioned information we just discussed about how they received their rather unfair and unlucky origin. Unlike here in our Western Society and the majority of Europe, there are plenty of other places in the world that view black cats as a symbol of good luck. The Scottish people believe that when a black cat arrives at a home they will be granted with prosperity. In Britain and Germany, they are revered as good luck as well as back in the days of Ancient Egypt where they were worshipped. It’s only in the United Kingdom that they believe a black cat coming towards you will bring good luck but will take it with them if they walk away from you. Though, the exact opposite of that was considered the standard for receiving and taking luck by pirates in the 18th century.