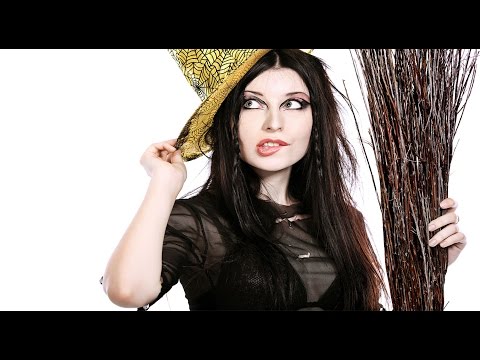 The Fascinating Reason Witches are Commonly Depicted Flying on Broomsticks

In the video today, we’re looking at why it is that witches are so commonly depicted flying broomsticks.

You may have heard that the reason witches are commonly depicted flying on broomsticks is to get high! But more than just a corny joke, this is essentially true. It’s thought the idea of witches flying around on broomsticks came from the practice of concocting hallucinogens and then using a broomstick to administer the drug to certain sensitive regions, thereby bypassing some of the negative side effects these hallucinogens cause when taken orally.

But let’s back up a little. Until quite recently, rye was the primary grain from which bread was made. Susceptible to a disease known as ergot, caused by the fungus, Claviceps purpurea, rye was so commonly infected with it that until the 1850s, people thought the purple ergot that grew on the rye was actually a part of the plant.

Notably, ergot contains a number of compounds including some hallucinogens. Thus, when a supply of rye became contaminated with ergot, those who consumed it sometimes also got a strong hit of the LSD-like fungus.

Not everyone who experienced ergot poisoning minded, and in fact many people, including women, actively worked with a variety of plants for the express purpose of inducing hallucinations.

Popular plants experimented on included several tropane alkaloids like henbane, jimsonweed, Mandrake, and nightshade. Together, these intrepid researchers discerned a variety of poisons that, in lesser quantities, could produce a desirable hallucinogenic effect.

Most of these hallucinogens also produced unwanted side effects when ingested, including rash, nausea and vomiting. Fairly early on, the pioneers of getting high realized they could bypass this discomfort by simply absorbing the drug through the skin. Many well-respected members of society were investigating the properties of these potions, including court physician Andres De Laguna, who in the 16th century studied such a substance after taking it from the home of a woman accused of being a witch.

He then tested it on another woman with the following result: “No sooner did I anoint her than she opened her eyes wide like a rabbit, and soon they looked like those of a cooked hare when she fell into such a profound sleep that I thought I should never be able to awake her… However … after the lapse of thirty-six hours, I restored her to her senses and sanity.” He also revealed that the substance was composed of “soporific herbs such as hemlock, nightshade, henbane, and mandrake,” and that the woman was not at all pleased about being woken up. She reportedly said, “Why did you awaken me… at such an inauspicious moment? Why I was surrounded by all the delights in the world.” Laguna then noted that, “From all this we may infer that all that those wretched witches do and say is caused by potions and ointments which so corrupt their memory and imagination that they create their own woes, for they firmly believe when awake all that they had dreamed when asleep.”

Yet another account by Giovanni Della Porta in the 16th century also affirmed that the application of this witches salve had the result of a woman he saw use it adamantly claim that “she had passed over both seas and mountains.”

Back to the absorption method- it was quickly discerned that two of the most effective places on the body to rub an ointment for maximum hallucinogenic effect were the mucous areas of the genitals and sweat glands of the armpits.

This topical means of drug delivery gave rise to thicker potions, balms and salves. For ladies who wished to partake, since brooms were readily available, it was a no-brainer to dip a broom handle into the ointment, and then straddle it.

Contemporary accounts indicate that as the balm began to have its effect, riding the broom became even more fun. For instance, Raphael Holinshed noted concerning the accused witch, Lady Alice Kyteler, in 1324: “In rifleing the closet of the ladie, they found a pipe of ointment, wherewith she greased a staffe, upon which she ambled and galloped through thick and thin.” In a 15th century account, Jordanes de Bergamo notes, “But the vulgar believe, and the witches confess, that on certain days or nights they anoint a staff and ride on it to the appointed place or anoint themselves under the arms and in other hairy places.”

Confessed witch Antoine Rose claimed that it was the Devil who gave her the concoction and that to use it, she would, “smear the ointment on the stick, put it between her legs and say ‘Go, in the name of the Devil…!’” So how did we get from salve covered broomsticks to flying around on them? After all, most of the early artwork depicting witches and their broomsticks tends to just show them on the ground and using the broomsticks (often in the nude) as previously described.

In the 16th century book On Witchcraft, Johann Weyer noted that once one of these ointments was applied to the genital area, it produced “a sensation of rising into the air and flying,” which caused many to believe this was done in order to “meet for devil worship….” About a century earlier, in 1453, the French male witch Guillaume Edelin confessed to this practice of flying on broomsticks, including mentioning watching his “aged mother straddle a broomstick and whisk up the chimney and out of the house.” Needless to say, in this instance, his aged mother likely wasn’t the only one partaking in the hallucinogens. And, as Andres De Laguna noted, people under the influence of these drugs seemed to firmly believe what they were seeing in their hallucinations was real, even after it was all over. This “rising” effect mirrors the more modern exploits of Gustav Schenk, who described his experience with one of the seemingly common witches flying ointment ingredients, henbane, in the 1960s: “I experienced an intoxicating sensation of flying .

. I soared where my hallucinations . . were swirling along.” He didn’t say how the drug was administered, or whether or not a broom was involved.