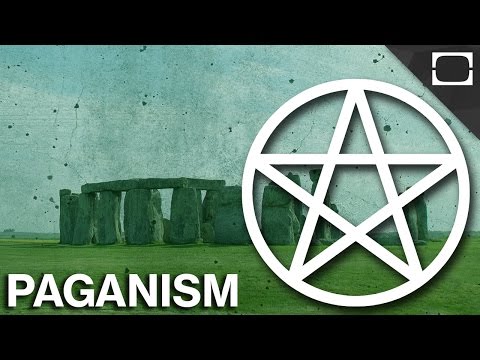 Every year, hundreds gather at Witchfest International in London. Marketed as the largest witchcraft festival in history, people from all across Europe come to discuss and practice ‘pagan’ activities. In fact, the United Kingdom has recently seen a huge upsurge of interest in paganism, causing a Christian activist group to declare it “one of the biggest threats to western civilization”. So, what is paganism? Well, the contemporary idea of paganism comes from ancient Europe’s pre-Christian religions. Greek mythology is itself a form of paganism, although the actual word pagan only really came into popular usage after the development of Christianity.

Christians would use the label in order to differentiate it from Abrahamic religions. But, what exactly IS paganism if not Christianity, Islam, or Judaism? Well, historically, it referred to country dwellers, and was actually a pejorative term to describe a number of “alternate faiths”. But, in modern times the neo-pagan movement has become associated with Wicca, or “Pagan Witchcraft”, which was invented by an Englishman in the mid-twentieth century. It was based on the idea that witches are not followers of Satan, as had been believed, but rather followers of a pre-Christian religion. Likewise, Druidism—another form of paganism—is on the rise. In pre-Christian Britain, Druids were the priests of mostly Western European Celtic societies. But today they are a loosely connected group which identifies less as a religious movement and more of a spiritual one. Like Wiccans, Druids revere nature, but they do not follow any sacred text or adhere to a strict set of beliefs.

Other, relatively modern mythologies, such as New Wave, heathenry, and shamanism [shah-man-ism] are all considered neo-pagan religions. In recent years, almost 57,000 people identified as ‘pagan’ in the UK alone, and some estimate roughly million in the United States. Other sources put the global number at about 3 million. By comparison, a relatively small religion like Sikhism has about 25 million adherents. In fact, since the word “pagan” generally refers to most of the world’s non-Abrahamic religions, it may be almost impossible to track down the total number of adherents. Still, despite being a predominantly Western movement, and reportedly the fastest growing religion in Britain- around the world, it is almost unheard of. A total of up to 13% of people worldwide have reported themselves to be “convinced atheists.” Learn more about atheism’s growing popularity in this video.

Thanks for watching TestTube! don’t forget to like and subscribe so you don’t miss out on new videos every day..